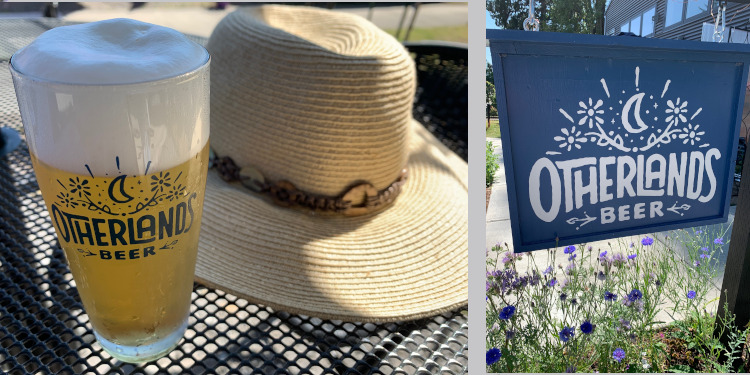 It is a brewery born out of a passion for beer, but also a love for travel and far-off places. Karolina Lobrow and Ben Howe have spent plenty of time in guesthouses and breweries in places like Denmark, France, and Germany. Their experiences visiting other lands helped drive the creation of Otherlands Beer, a brewery that opened earlier this summer in Bellingham, Washington. In addition to beer, Otherlands also serves up European-inspired food.

The brewery is located in Bellingham’s Sunnyland neighborhood, not far from Twin Sisters Brewing, Stemma Brewing, and Kulshan Brewing. It is an easy stroll from one to the next. (Wander Brewing is also within strolling distance but a bit farther to the west.) In addition to their indoor space, Otherlands Beer has a lovely little patio area with a handful of tables. I recently enjoyed some time at one of those tables on a lovely summer afternoon.

Otherlands Beer differentiates itself from the other breweries in town by focusing on rustic, European-style beers, brewed using old-world techniques and traditions. Sure they offer American-style, hop-heavy IPAs and Pale Ales, as you’d expect, but where they really hope to make their mark is by creating the kind of beers they’ve tasted in faraway places like the Franconia region of Germany.

About the Beer at Otherlands Beer

Across town at Chuckanut Brewery, the focus is largely on European-style lagers, honed to sparkling and precise perfection. At Otherlands, Ben Howe also creates beers that rely on European tradition but his offerings are more rustic and folksy. They are the kind of beers he and Karolina have enjoyed while traveling across Europe but too rarely find at home: the kind of European lagers that don’t make it across the pond, in part, because of their unfiltered, unpasteurized nature.

Beyond lagers, the farmhouse beers at Otherlands are fermented with an evolving house yeast and given ample time and ample opportunity to continue fermenting in the keg or the bottle. Even the IPAs and Pale Ales might offer a little old-world surprise.

Otherlands creates the kind of European beers that are particular to a certain place. Here’s an example. While we were there, Otherlands tapped a very special beer poured from a German gravity keg (pictured below). Unfiltered, unpasteurized lager is allowed to condition in the gravity keg to develop more character and flavor. It is then poured directly from the keg, pushed into your glass by gravity and not CO2. The method is similar to what beer geeks typically think of as cask-conditioning an ale. 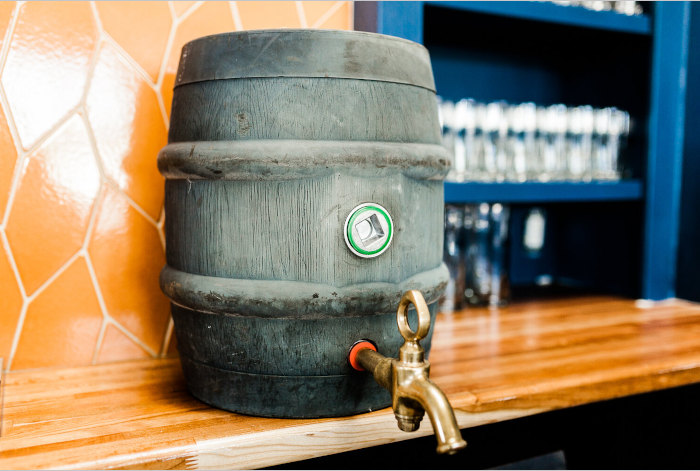 This particular beer, a pale lager, was Ben’s attempt to recreate a beer that he and Karolina discovered and adored during one of their adventures in Europe. They remembered the beer so fondly that Ben eventually managed to appropriate a pitch of the brewery’s yeast from halfway around the world. I did not mire my drinking experience with too many questions, and I’m not even sure what the beer is called, but I’d guess it was brewed with a very particular and unique Franconian lager yeast.

Here’s what I know about the brewing process. Decoction mash, horizontal lagering tanks, then conditioned in a German gravity keg. The taste? Yeast-forward, but not funky, the flavors, spread out like butter atop a slightly sweet slice of rustic multi-grain bread. Smooth and approachable, but also a bit complex. Rustic and sophisticated. Folksy? Yeah, folksy. I could imagine myself in a faraway land quaffing a few liters in a biergarten or a bierkeller. That’s when the brewery’s name began to make more sense.

You might ask: what's this Babcia (Polish for "grandmother") doing pouring hops into our kettle? Would you believe she helped brew our Polish-style Pilsner, "Haładuda Specjal," which we're releasing this Thursday? Taking it's name from the matriarchal lineage of Karolina's Babcia, "Haładuda Specjal" is a rustic and unfiltered 11° Pilsner brewed with Czech malt and Polish hops that celebrates the land of her birth and the strong women of the Haładuda family. Join us this Thursday for a special gravity keg of Pilsner on the patio and plates of Grandma's cookies. Yes, really. Grandma's cookies and pilsner.

That Polish Pilsner mentioned in the Instagram post shown above is pretty fabulous. I wish I’d been there for some of the cookies and the gravity keg of that one! Me, I had to settle for pierogies and pale lager that I assume was Franconia in its basic nature. I did get to enjoy a glass of the regular draft version of the Polish Pilsner. I’m a fan.

About the People at Otherlands Beer

Karolina and Ben met while working as servers at Cambridge Brewing in Massachusetts. Thereafter, they relocated to Portland, Oregon where Ben worked at Wayfinder Brewing. Somewhere along the way, they hatched the idea to create a brewery of their own. Eventually, they decided to open Otherlands Beer in Bellingham, a place where Karolina had lived years before.

When I visited, Karolina’s father was working at the brewery, putting the finishing touches on some plastic partitions out on the patio. They were still putting some final touches on the place. We couldn’t help noticing Karolina talking to her father in a foreign tongue. Her whole family emigrated to the U.S. from Poland when she was about five years old. For some years, they bopped back and forth between the two counties.

About the Food at Otherlands Beer

And speaking of European influence, you’ll find plenty of it on the food menu. The latkes were fabulously golden, crisp, and savory. Perhaps the star of the menu, the pierogies were stuffed with pillowy potato and cheese, with beer-brazed onions, all served in a creme-fraiche sauce. Along with my European comfort food, I enjoyed a fabulously fresh salad: the Summer Heat Corn Salad, with sweet corn, arugula, pistachios, cherry tomatoes, jalapenos, and spiced feta.

Masks in bars and taprooms. What's all the hubbub about?
Enjoying great beers in the great outdoors of Port Townsend, Washington
The Good Society is open, inside and out, for your beer drinking pleasure