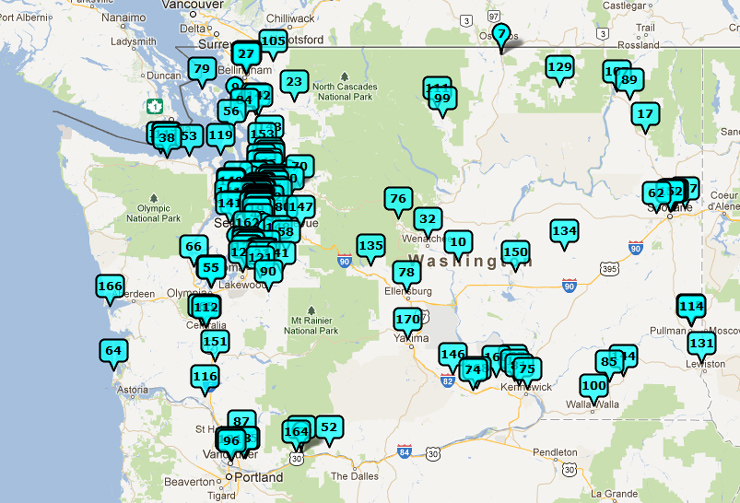 Rich La Susa is a man on a mission. To say he gets around is an understatement. To date, he has visited more than 1,200 breweries. That number continues to grow. A brewery historian hailing from Gold Canyon, Arizona, Rich is a regular columnist for The Breweriana Collector, the magazine of the National Association of Breweriana Advertising (NABA).

In April 2012, Rich La Susa and a few of his friends came to Washington to visit breweries. They also visited a few in Oregon. It sounds like they had a great time. In two weeks they managed to hit 107 breweries (more, actually), crisscrossing the state in search of beer. Yikes! That is impressive. Rich recently published the following story in The Breweriana Collector. We are happy to post it here for your enjoyment. Consider it a visitor’s impression of the Washington beer scene.

For more information about the National Association of Breweriana Advertising (NABA), visit http://www.nababrew.com. If you would like to contact Rich La Susa, shoot me an email and I will facilitate an introduction.

By Rich La Susa (and friends)

A two-week, tour of breweries in Washington, and a few in Oregon, that consumed the second half of April for me and three companions could easily require book-length treatment. That won’t be the case here. A brewery by brewery, drink by drink narrative, this is not.

What I offer instead is a sampling, snack-food journalism. The top breweries and brewpubs in a variety of categories have been arbitrarily selected by a panel that includes me and my astute tour companions, George and Dale Miller from Plymouth, Conn., and Ron Jones, Peoria, Ariz.

The official count of breweries visited is 107, although we set foot on at least 125 active brewery sites. Only breweries in which beer was consumed (102), or were open at the time of our visit, made the official count. Unfortunately, a few brewery owners and staffers welcomed us but, for various reasons, did not offer tastings. Other breweries were closed for the day when we visited. Breweries that no longer brewed, were permanently closed, under construction or unverified were not counted. There were many in the unverified group, particularly those located in residences or on farms.

Of course, in addition to tasting brews, collecting microbreweriana was high on our to-do list. “The trip was really productive from a collecting point of view and great fun,” George said.

George masterfully used a computer mapping program to chart segments of tour more efficiently. Dale’s magic tablet utilized the addresses and pointed us in the right direction, to the correct town and brewery, which immensely pleased Ron, who was our driver. “If it’s late Friday, Day 11, it must be Rogue,” Dale said, after many mind-numbing hours of navigating.

Now it’s time to share snippets of information from a most interesting adventure.

There are ties for positions in this and other categories. Indecisiveness? Perhaps! After all, we aren’t selecting the president of the United States, and the fog of visiting so many breweries in such a short time is still pervasive, handwritten notes not withstanding.

George, a fellow IPA aficionado, contributed to this selection.

The Extra Special Bitter (ESB) style of ale is one of Dale Miller’s favorites, and she tasted at least 19—that she can recall. (Hard to remember,” she said. “Seems only the ‘Not so Good’ stand out from the crowd!”) Her favorites are:

These were the styles favored by Ron Jones. He said American’s Caboose “was the best oatmeal stout I’ve had since Mickey Finn’s.” In the 1990s, that Libertyville, Ill., brewery’s Five Springs Oatmeal Stout was an award winner.

Most potent (but drinkable) brews

Big-hop IPAs, some in the 90 to 120 IBU range, are the rage in Washington. Despite the high IBU count, some were surprisingly tasty. Others…well…who likes mouth-puckering gimmicks?

(IBU is an abbreviation for International Bitterness Units, a scale used in the U. S. to measure the perceived bitterness of a beer.)

Favorite breweries (They have it all!)

Following are the over-all favorites, among brewpubs and breweries, based on beer quality, atmosphere and staff friendliness and efficiency. Georgetown is a large, sparkling production brewery in an industrial district. Its spacious tasting room is impressive, as is the cordiality and beer knowledge of its employees. The latter two attributes were evident among all breweries selected.

Making decisions in this category were difficult because we encountered many genuinely congenial folks who were generous with their time. Many more could have made the list and by limiting this to five, we do injustice to those who served us so well. Some opened their tasting rooms early or invited us in when they were working on a “day off” to satisfy our thirsts and whims. When Dave Shillington the host at BarHop Brewing Co./Harbinger Winery in Port Townsend learned we had visited more than 1,100 breweries each, he went around the bar and hit a large, and loud, gong in celebration.

7 Seas is in a small building, with a nearby beer garden, tucked in back of a large resort; North Fork is a combination brewpub, beer museum and wedding chapel; Foggy Noggin is a tasting room in a large garage in a wooded residential neighborhood; Slippery Pig is on a farm in Poulsbo (pronounced Paul’s bow); Skye Book and Brew is a combination brewpub, library and coffee shop. Laht Neppur (located in a farming community) is the owner’s name, Ruppenthal, spelled backward; supposedly, it’s Gaelic for “Drink to Life.”

Pike has the largest and most impressive collection, including an array of ball knobs and beer signs, including pre-prohibition advertising. North Fork’s collection is smaller, but features quality beer advertising and vintage bottles. I have previously written about Big Time’s large vintage sign collection. Twelve different clean Rainier Jubilee cans were on display in the Lazy Boy tasting room, and dozens of metal trays on the octagon-shaped walls at Birdsview.

Food in most brewpubs was average, at best. Elliott Bay in Burien, the brewpub closest to SeaTac airport, was our first stop on April 17 and our final brewery visit, on April 30. The food and beers were excellent each time, as they were at others selected.

Many friendly dogs were observed in or near other brewery tasting rooms, hanging out with the owners, not official “brewery dogs,” such as the three on this list. Max’s shtick was eating peanuts.

2. George’s favorite slogan was “Live Long in Prosser” (Horse Heaven Hills Brewery, Prosser). His favorite comment came from Steve Acord, co-founder (with his wife) and brewer at Dirty Bucket, who referred to us as “Beer Geo-Catchers.”

3. Merrily Lewis, a bartender at the Roslyn Brewing Co., in Roslyn, was a regular extra in the 1990s TV series Northern Exposure, filmed at the nearby Brick tavern. Roslyn was called Cicily, Alaska, in the program, and the Brick featured lots of beer advertising.

4. The new Churchkey flat-top beer can actually is filled in a back room at Two Beers Brewing Co., Seattle, which also brews the beer.

5. The latest trend in Washington are NANO breweries that brew (some really well) less than three barrels of beer at a time and are set up in garages and outbuildings in residential neighborhoods and business parks. One brewer told us he plies his neighbors in a quiet residential community with brews to placate them.

6. The Emerald City Brewery is in the former Rainier Brewing Co. in Seattle.

8. Sound Brewery’s 22 oz. labels look like they should be on wine bottles.

9. Although far from the best beer tasted during the tour, the Spruce Tip Ale, made with Alaskan spruce tree tips by the Peaks Brew Pub, was the most unusual. It was even drinkable, if only in small quantities.

10. Most Washington breweries offer 12-ounce glasses of beer they call schooners, an alternative to 16-ounce pints. We availed ourselves of many.

Of course, some brewers, owners and barkeeps did not receive high marks from us.  However, singling them out for criticism would accomplish little. Still, that people who work in a customer-friendly industry could be grumpy, indifferent or rude was as hard to swallow as some of the beers they served.