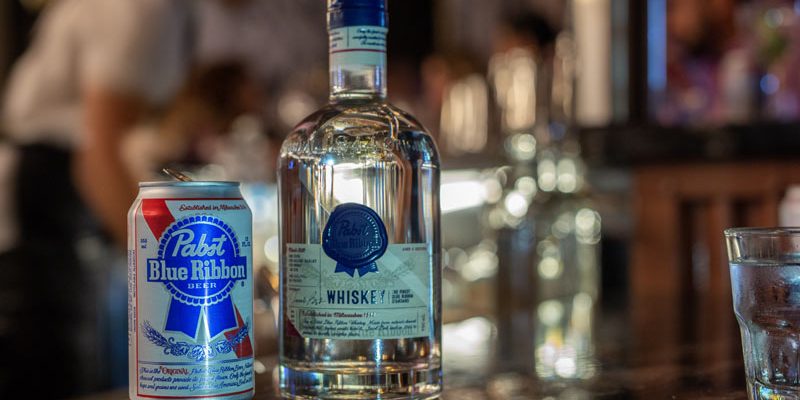 Pabst Blue Ribbon beer is iconic. You don’t have to like the stuff to admit that PBR is a cultural phenomenon. The name Blue Ribbon is attributed to the beer winning the honor of “America’s Best Beer” at the 1893 World’s Columbian Exhibition in Chicago. That’s the legend, and it may or may not be true, but it is an indisputable fact that some version of Pabst beer has been consumed in America since 1844. It was a favorite of factory workers during the industrial revolution and remains the beer of choice for 21st-century fratboys and hipsters.

Like I said, you don’t have to like the stuff, but you must admit that Pabst Blue Ribbon has earned a place in the annals of American cultural history.

And now Pabst introduces a whiskey: Blue Ribbon Whiskey. They proudly claim that the whiskey is aged for five seconds. Here’s the official release announcement with more information.

For over 175 years Pabst Blue Ribbon has celebrated the individuals and doers who choose to forge their own path, those who push boundaries in their quest for the Blue Ribbon standard. In 2019 the iconic Pabst Blue Ribbon brand continues to blaze its own trail with the release of its first distilled spirit, Blue Ribbon Whiskey.

Jacob Best’s notes show he was distilling before he was making beer in 1844. He was trying to create an easy drinking spirit that was better than the terrible imports on the market. As history shows he did create something amazing, but it was beer not whiskey. 175 years later Pabst Blue Ribbon is following Jacob’s lead, launching Blue Ribbon Whiskey.

Over the past two years Pabst has been working with craft distilling partners at New Holland Grand Rapids, to create a unique mash, using ingredients that it’s believed Jacob would have had available to him. The result of that two year process is Blue Ribbon Whiskey, which will roll out across America this Fall.

“We’re incredibly proud of what we have made with our distilling partners at New Holland. We have done our best to create an amazing mixable, drinkable and shareable white whiskey that can be mixed, shot or transformed into a cocktail,” said Matthew Bruhn, general manager at Pabst Blue Ribbon. “We created this whiskey to be drunk, not judged, just like our beer.”
Mash Bill:

About Pabst Blue Ribbon
Since its founding in 1844, Pabst Blue Ribbon, the original American lager beer, has been connecting with local communities across America. Pabst Blue Ribbon engages and supports individuals who are passionate about forging their own path in life, and will continue to empower new generations who believe in the future of America.