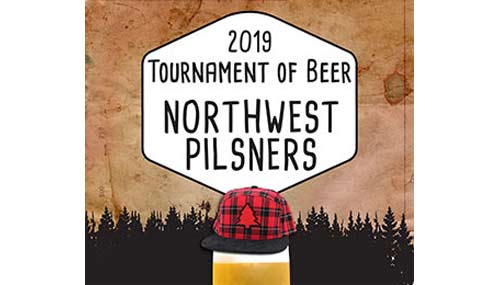 Here’s the press release from Peaks and Pints:

Consider pilsner. Few other beers are as crisp and nervy as a good pilsner. The best snap your mouth to attention with a clean, bracing bitterness, delicate floral aromas and perhaps a suggestion of sweetness. The pilsner wears the granddaddy of lager beers ribbon. It’s the one they all descend from — the style that set the hops and malts rolling and ignited the world’s passion for pale, crisp, light beer. It’s simply the most popular beer style in the world.

In the Pacific Northwest, there are more than 64 popular pilsners. The Tournament of Beer proves it. During the month of February, Peaks and Pints craft beer bar asked its patrons and the public to vote for their favorite pilsners brewed in Washington and Oregon. Through an online nomination system, beer enthusiasts listed 81 pilsners with the top 64 seeding the Tournament of Beer: Northwest Pilsners’ knockout bracket. Kicking off April 5 at tournamentofbeer.com, many will consider pilsner as they vote on four pilsner battles, Monday-Friday, until the tournament’s final game, April 27.

We’re not talking about corn syrup lagers, folks. That tournament will never happen at Peaks and Pints. We’re talking pilsners brewed in the O.G. of the pilsner style, Czech (or Bohemian) Pilsner with Bavarian bottom-fermenting lager yeasts, lighter malts, and spicy Saaz hops, AND German pilsners, aka pilsener, aka “pils,” a style made with pilsner malt, Saaz or any combination of German noble hops, for a more hop-forward pils than the Czech version. Peaks and Pints seeded the top 64 Northwest pilsners voted in four bracket regions — Seattle/Greater King County, Washington state, Portland/Greater Multnomah County and Oregon with one pilsner per brewery.

The top 64 vote-getters — the cream of the crisp — will compete Monday through Friday at tournamentofbeer.com (forwards to peaksandpints.com), April 5-27. Through online voting, Washington and Oregon pilsner drinkers will vote Monday-Friday until the best pilsner in the Northwest is crowned. It’s just like March Madness, only with way more Saaz hops.

The malt-to-malt battle of Northwest pilsners grand champion will be announced at the Tournament of Beer Party, April 27, at Peaks and Pints, 3816 N. 26th St., in Tacoma’s Proctor District. The final two pilsners will battle live pouring from our Western red cedar tap log with the champion brewery receiving a permanent handle at Peaks and Pints through the spring and summer 2019.

Look for the first round of Northwest pilsner battles April 5, 2019.

About Peaks and Pints

Peaks and Pints is a craft beer bar where brew nerds can wave their geek flags.

Peaks and Pints is a bottle shop with a broad and deep selection of craft beer and cider in bottles and cans, as well as growler fills.

Peaks and Pints is a mountain-themed lodge with tasty sandwiches, salads, appetizers and desserts.

Peaks and Pints sits atop of Proctor Peak in Tacoma’s Proctor neighborhood.