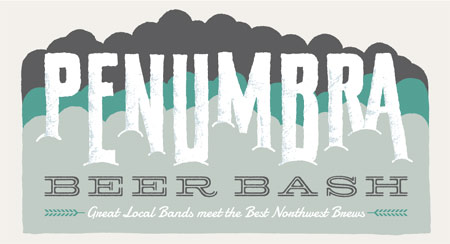 Too often, music is little more than an afterthought at beer festivals. Sure, there are a few exceptions, but as a rule, beer festival organizers don’t concern themselves too much with music. That’s why I was so excited last year when I learned about Penumbra Beer Bash, a legitimate beer fest that bucks this trend and features emerging artists from across the Pacific Northwest. Music and beer. As it should be.

They’re doing it again this year. Penumbra Beer Bash takes place on March 29th in Seattle and will feature beers from 26 breweries and music from some of the Northwest’s top emerging artists. Like last year, among the 60 beers, at least 10 will be pushed through Randalls. Tickets for Penumbra Beer Bash go on sale today, Wednesday, Feb 12 – click here.  Below is more information from the event organizers.

Penumbra Beer Bash is Back, Tickets on Sale February 12th

SEATTLE (February 10, 2014) — The Stranger, The Genius Awards 501c3, and Hot Axe Productions are proud to announce that the 2nd Annual Penumbra Beer Bash will take place on Saturday, March 29th at King’s Hall in Seattle. Tickets will be on sale starting February 12th and can be purchased via our website at www.penumbrabeerbash.com.

This year’s musical lineup features some of the very best emerging artists from the Pacific North West including Chastity Belt, The Comettes, Broken Water, Dude York, and The Shivas! Along with kick ass music, Penumbra Beer Bash has assembled a beer lineup featuring some of the most well respected breweries from Oregon and Washington. 26 breweries, 2 cideries, and 1 kombuchary will pour over 60 beers, including at least 10 unique Randall offerings available to VIP ticket holders. Penumbra guests will also be able to choose from several different food trucks and a hot dog vendor to help soak up the suds. For more information and to purchase tickets, please visit our website at www.penumbrabeerbash.com or follow us on Facebook and Twitter.

If you are interested in becoming a volunteer (which gets you in for free) or would like to become a sponsor, please send an email to [email protected].

In its first year, the Penumbra Beer Bash sold out in advance, so please don’t miss out on your opportunity to join the party! See you on March 29th.