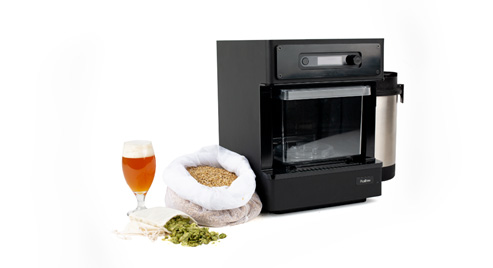 The PicoBrew appliances offer a sleek, innovative, simplified way for people to brew their own beer at home. However, using the pre-packaged ingredients and pre-programmed settings made some homebrewers feel a bit hamstrung. The company recently introduced Pico UnPak’d, which allows users to fully flex their creativity and brew their own custom recipes on their Pico devices.

Users will find a “Manual Brew” option on their Pico device the next time it is powered on and connected to Wi-Fi for the update. To facilitate the creation of custom recipes, Pico is now selling reusable hops and grains brewing bags on PicoBrew.com.

Here is the press release announcing the introduction of Pico UnPak’d:

PicoBrew, the leader in craft beverage brewing technology, today announced new functionality that enables users to use their own grains, hops and other ingredients to brew freshly crafted beer with the Pico C, Pro and S appliances. Users will also have access to the proprietary online PicoBrew RecipeCrafter tool to create their own beer recipes. The new Pico C UnPak’d Bundle includes everything needed to take advantage of this new functionality.

“At the heart of PicoBrew has always been the home crafter: those experimenting with new recipes and adjusting each and every one to perfection, utilizing new and different ingredients every time,” said Dr. Bill Mitchell, CEO, PicoBrew. “The PicoBrew community spoke and we listened – we’re pleased to announce that Pico UnPak’d now makes it possible for users to harness the precision control of our Pico C, Pro and S appliances for their own custom recipes. Our easy-to-use RecipeCrafter tool will help users adapt their existing homebrew recipes or create new ones from scratch.”

Existing Pico C owners can also now use their own ingredients by purchasing a Pico C UnPak’d Kit that includes reusable grain and hops beer bags, and reusable bags for cold brew coffee for $19.99.

All existing Pico S, Pro and C appliances will automatically update with the UnPak’d program the next time they are powered up and connected to WiFi.

“Whether users choose to create their own recipes from scratch or choose from the 200+ PicoPaks already available in the BrewMarketplace, PicoBrew now gives you the capability to brew it all!” continued Mitchell. “With the ability for consumers to craft their favorite beverages like Beer, Cold Brew Coffee and Kombucha – plus the functionality for sous-vide cooking – we see an increasing number of users including PicoBrew in every part of their day.”

PicoBrew and its line of brewing appliances have been recipients of numerous awards over the years including being named among Fast Company’s The World’s 50 Most Innovative Companies in 2017 and CES Innovation Awards Honoree for Eco-Design and Sustainable Technologies in 2017 and Home Appliances in 2016, and a TWICE Picks Award in 2018.

PicoBrew was founded in Seattle in 2010 by brothers Bill and Jim Mitchell, a former Microsoft executive and food scientist, along with engineer Avi Geiger.  Combining their food science and technology expertise with their passion for homebrewing, they set out to improve the craft beer brewing process for small producers and homebrewers. PicoBrew introduced its flagship product, the award-winning Zymatic® automatic beer-brewing appliance for beer brewing professionals and homebrewers, in 2013. The Pico™, designed for consumer craft beer enthusiasts, followed in 2016. Both product lines are designed to improve the precision, repeatability and overall quality of the brewing process to create consistently delicious craft beer. For more information, visit www.picobrew.com or follow PicoBrew on Facebook, Twitter or Instagram.