Kickin’ Boot Whiskey Kitchen in Ballard is about to celebrate its first anniversary with a Pig Pickin’ Jamboree. So what do pigs and whiskey have to do with beer? Well, the event cosponsor is Maritime Pacific Brewing, who happens to produce Kickin’ Boot’s house IPA. This aint no normal IPA: it’s a Bourbon-barrel aged version of Maritime Imperial Pale Ale made exclusively for Kickin’ Boot. That’s not the only good beer they serve at Kickin’ Boot, but it’s a damn good one and you won’t find it anywhere else.

At the Pig Pickin’ Jamboree, Kickin’ Boot will roast four pigs over the course of three days: August 16, 17 and 18 (Friday, Saturday and Sunday). There aint no fee and the pickin’ part means y’all get to come pick at the pig for free. Dang me! It’s hard to avoid pickin’ up a southern drawl whenever I talk ’bout Kickin’ Boot.

The party will take place on the patio beneath Kickin’ Boot, where they’ll be serving up the pig and pouring beer. On Saturday there will be live entertainment and a special whiskey tasting in the bar. And of course there will be beer all weekend. The event benefits the Ballard Food Bank.

For the uninitiated, Kickin’ Boot Whiskey Kitchen is a southern-style smokehouse and drinkery with a historic flair. This restaurant and bar harkens back to a simpler and more hospitable time. They serve southern classics like shrimp and grits, a catfish po’ boy, and buttermilk fried chicken alongside deliciously smoked meats (the pulled pork is stupid-good). Along with all that, they serve over 100 different whiskeys, 70-something of which are Bourbon, classic cocktails and some good draft beer (including the aforementioned Maritime Bourbon-Barrel IPA and Northwest Peaks Redoubt Red, for you hyper-locavores). Check out the website for more information. 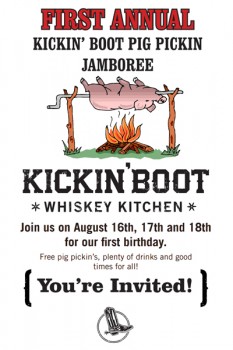