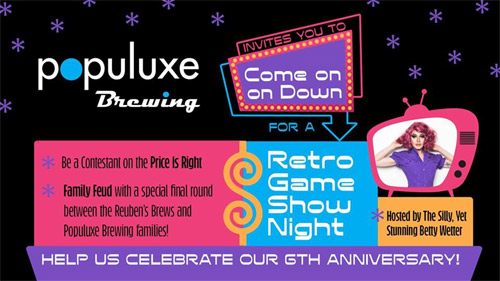 Here’s what the brewery has to say about this Saturday’s event:

On Saturday, March 23rd from noon to 10:00 PM, Populuxe Brewing will celebrate its 6th Anniversary by hosting a Retro Game Show Night emceed by the silly, yet stunning Betty Wetter.

The event, which is sponsored in part by Verity Credit Union, kicks off at noon. The first 20 customers will receive a free commemorative t-shirt with their beer purchase. There will be opportunities to spin the Wheel of Fortune throughout the day to win additional prizes.

At 5:00, attendees will have a chance to be a contestant on the Price is Right, competing to identify accurate pricing of merchandise for prizes.

At 7:30 teams of four can face off in a game of Family Feud, with a special final round between the Reuben’s Brews Family and Populuxe Brewing Family.

More details on how to be a contestant will be posted on Facebook and Instagram as the event nears.

Peasant Food Manifesto will be onsite for all your dining and with cuisine mimicking the TV dinners of your youth.