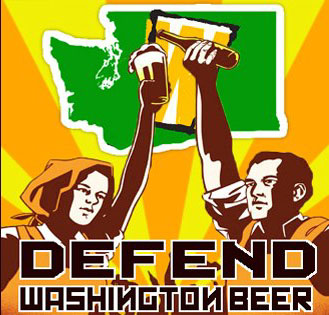 Below is the official press release for this Friday’s Defend Washington Beer rally in Olympia. Please share it as you can. Let’s help get the word out, not only to other beer lovers but to the media.

A Rally in Olympia on Friday to Defend the Brewing Industry

(Monday, April 15, 2013) – Seattle, WA – A group of craft beer enthusiasts, brewing industry workers, and other concerned citizens will rally in Olympia this Friday to stand united in opposition to the proposed beer tax increase. The Defend Washington Beer Rally takes place at the Capitol steps on Friday, April 19 at noon.

The goal of this Friday’s Defend Washington Beer Rally is to capture the attention of lawmakers, making it clear that real people stand in opposition to the proposed tax increase. They are not protesting the increased cost of a pint of beer; rather, they are protesting a drastic increase to the already-high tax on breweries and the potential ramifications it could have on the craft beer industry. The rally’s organizers understand the current budget crisis but feel that this tax plan is ill advised and shortsighted.

“Over the past five years, Washington’s craft beer industry has seen an explosion of growth,” says Joe Korbuszewski, one of the event’s organizers. “This has resulted in the creation of more jobs and small businesses. We feel it is irresponsible to overly tax an industry that would be devastated by such an increase, not to mention the ripple effects it would have on the local economy.”

The Legislature recently introduced a budget plan that includes an increase to the excise tax that all craft breweries pay on beer sold in Washington. In particular, the plan calls for a drastic increase in the tax rate for craft breweries producing less than 60,000 barrels per year. With the exception of Redhook, all of Washington’s nearly 200 breweries fall into this category. The tax proposal does not raise taxes on larger breweries. This Friday’s rally is a show of support for Washington’s breweries, which would be most greatly impacted by the tax increase.

“It’s one thing to tax us, the consumers, at the point of purchase; it’s another to tax small businesses that run on slim margins at the point of production,” says Korbuszewski. “We understand our state’s crisis with the budget shortfall, but we feel that this tax is simply too much.”

Kendall Jones, producer of the Washington Beer Blog, agrees. “This isn’t about my pint price. This is about impeding an industry that we should be fostering. I don’t think this proposal has been properly vetted. I say that because I do not believe our Governor and our Legislature actually want to stymie job creation. Craft beer is a growth industry, creating the best kind of jobs: manufacturing jobs. At least that’s what the local craft beer industry has been doing in recent years and is doing right now. This proposed tax increase jeopardizes all of that.”

Craft beer lovers, brewery workers, and many other people who work in pubs, bottleshops and businesses that benefit from Washington’s vibrant craft brewing industry will attend Friday’s rally in Olympia.