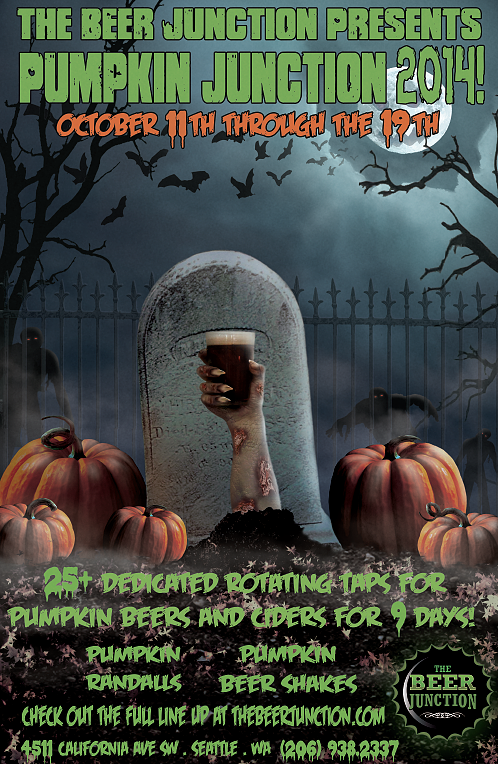 So you missed last weekend’s Great Pumpkin Beer Festival, eh? Or maybe you didn’t get enough pumpkin-fueled fun? Either way, The Beer Junction has you covered. Pumpkin Junction gets started tomorrow.

Below we share some information straight from the source. This includes the impressive beverage linup as well as information about this year’s Pumpkin Junction T-shirts (always a big hit).

Here is more information straight from the source:

Tomorrow (Saturday October 11th at 11AM) we kick off our largest and favorite event of the year— it’s the 3rd Annual Pumpkin Junction! It is going to be our biggest, baddest, pumpkiniest (we even had to create our own word to describe the mayhem) year we have ever had. It promises to be 9 days of 25+ rotating handles of pumpkin beers, ciders, and meads, plus lots of fun events occurring throughout the fest.

From Saturday October 11th to Sunday October 19th, we’ll be devoting 25+ taps to some of the best and most unique pumpkin beers and ciders around. With over 60 pumpkin beers & ciders ready to be tapped, there’s something for everyone.

If you aren’t a pumpkin fan we’ll have plenty of other taps going all week, including lots of fresh hop beers!

READ BELOW FOR ALL THE DETAILS 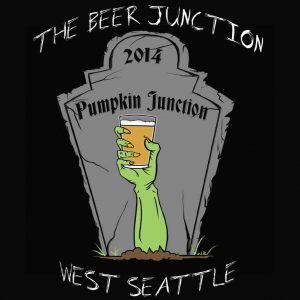 New shirt design!
Once again we designed a shirt for the big event. Available in sizes Small through 3XL for $17.99. We also have shirts available from our past Pumpkin Junctions, in 2012 and 2013. Get the shirts from all three years for just $40.

Pumpkin beer on cask!
We will be showcasing the Cask Pumpkin Ale from Seattle’s Machine House Brewing. These guys are known for their excellent cask conditioned beers and this one is no exception.

Pumpkin Mead!
Seattle’s BeeHaven Meadery’s Pumpkin Spice was a huge hit last year and we have brought it back again. If you dawdled last year and missed it… now is your chance to taste what others were raging on about throughout Pumpkin Junction 2013!

Sampler trays available!
Don’t know what to order? Custom build your own pumpkin beverage sampler tray to try several side by side!

Vote, Vote, Vote!
With each pumpkin beverage order you get to cast a vote for your favorite. We’ll announce the top three on the last day of Pumpkin Junction (Sunday October 19th).

Halloween movies!
All week long we’ll be showing the classics including Dawn of the Dead, Halloween, and Friday the 13th!

On Deck Headliners (tapped each day at 5PM)

Seahawks game on with sound starting around 1:25PM!

Growlers of all pumpkin beers and ciders are $3 off all day Monday the 13th to Wednesday the 15th.

We always have a tasting event on Thursday nights and this week is no different. Join us from 5-8PM as wild man Devon “RANDALLLLL!”  Simonsen pours some of our favorite pumpkin beers including an exciting randall combo. Sample five pumpkin beers for just $4 from 5-8PM.

(All Day) Wear your Halloween costume to receive $1 off pumpkin beers/ciders/ sampler trays or $2 off pumpkin growlers!

(5PM) College Football: Washington vs. Oregon game on with sound.

*Sunday October 19th- Winners announced!
You’ve voted all week—now find out who the winners are! Results will be announced for the top three vote getters at 6PM.

We also have a huge selection of 40+ pumpkin beers and ciders in bottles ready to take home. Below is the full list. Purchase a full case of the same item (if available) and receive 10% off!