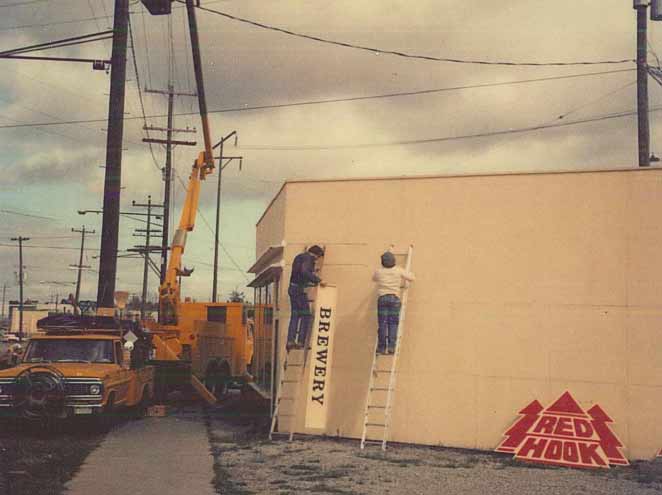 By now you may have heard rumors about Redhook returning to Ballard or Fremont. Well apparently it’s true. Redhook Brewery recently announced that it is exploring opportunities for returning to either Ballard or Fremont where it would open a new brewpub. Right now I don’t know much more than that, but I’m working on it.

Quick history for all you young ‘uns. Abbreviated and abridged:

Redhook started brewing in a converted auto repair shop in Ballard in 1981 or 1982. There is some debate, but the way I always knew the story, the company was founded in ’81 but sold its first keg in ’82.

It was Seattle’s first craft brewery. It opened at about the exact same time as Bert Grant’s Brewery Pub in Yakima. At that time, you could count the number of craft breweries in America on your fingers. They were not called craft breweries yet.

In 1989, they opened a new brewery and the Trolleyman Pub opened in the spot that is now Theo Chocolates, across the street from Brouwer’s Cafe. That’s when they left Ballard.

In 1994 Anheuser-Busch purchased a 25 percent stake in Independent Ale Company, the Seattle company that produced Redhook. Anheuser-Busch distributed the beer far and wide as part of that agreement. They were not bought by Redhook, although some people are happiest if they believe otherwise.

Fueled by A-B’s investment and the prospects of being distributed by A-B, in 1994 they built the brewery and pub in Woodinville. Brewing operations moved to Woodinville but the Trolleyman stayed open in Seattle.

In 2002 they bid farewell to Seattle altogether and closed the Trolleyman.

In  2008 Widmer Brothers Brewing and Redhook Ale Brewery joined together to form the Craft Brewers Alliance (CBA). It is an independent, publicly traded company.

About 18 months ago I was having a beer with someone who happens to work in a position of some importance for Redhook. We were discussing, among many unrelated things, exactly what Redhook could do to become relevant in the eyes of local beer drinkers again. What would it take for Redhook to be cool again?

My suggestion, which is hardly original, was to open a small, satellite brewery or brewpub back in the old neighborhood. Not only that, but install something like a 10-barrel system and give the brewers creative license to produce interesting, uncommon beers.

Like I said, it wasn’t exactly an original thought. It had been run up the Redhook flagpole before but nobody ever saluted.

But wait! Redhook is talking about a return to Ballard or Fremont. If they follow through on the second part of the deal, I’ll be the first one at the bar on opening day.