Enjoy experimental, one-off, taproom-only beers from the comfort of your own home

Not long ago, I featured Adam Robbings of Reuben’s Brews as a guest on BEER:30, the series of live happy hour chats I’ve been sharing via Facebook Live. (You can also see them in perpetuity here.)  One of the topics we discussed was the way Reuben’s Brews has not skipped a beat during the pandemic shutdown. 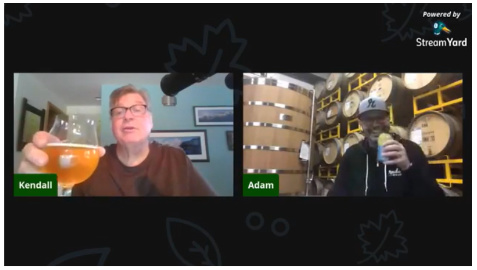 Amazingly, Reuben’s Brews produced 170 different beers last year. So far in 2020, despite the disruptions, the brewery has already released 90 beers, including 39 since the pandemic shutdowns started back in March.

According to a survey the company conducted recently, one of the things people miss about visiting the tasting room at Reuben’s Brews is the vast array of new, experimental, and one-off beers the brewery always has on tap. The survey also revealed that even when the taprooms reopen, some people will still feel most comfortable enjoying beers at home. With all that in mind, Reuben’s Brews introduces the #ReubensatHome crowler series.

According to a statement from the brewery, “The #ReubensatHome beers will often be a single keg experimental infusion, and when they sell out, they’re gone! We will announce each day’s beer via our Instagram and Facebook Stories, so be sure to follow us to get all of the updates. When our Taproom re-opens we will also have the #ReubensatHome beer listed on our online taplist.”

“… we want to give you more access to the experimentation that we’re up to at the brewery. So we will be releasing a new one-off crowler every single day!”

“We’ve always been ambitious on the number of different beers we brew; we are always trying out new styles of beer and new variations of our current beers. Research and innovation is just in our nature. We’re not shy to go against the grain and chase our passions: did you know that on the day we opened in 2012 we didn’t have an IPA on tap? We started with Roggenbier, American Rye, American Brown, Robust Porter, and Nitro Dry Stout.”

“Our philosophy is to let our beers grow and scale at their own pace: we start off with small test batches in our tasting rooms and react to your feedback. We’ll brew the good ideas again, in a bit larger batch. The next time maybe we’ll do a batch large enough that a small amount can go in to distribution. But our intent is the same: let’s experiment, see what works and what people love, and then find a way to make more of it.”

Keep an eye on the Reuben’s Brew taplist on the website, or follow the company’s social media channels to stay informed about these beers.
https://www.facebook.com/Reubensbrews/
https://www.instagram.com/reubensbrews/