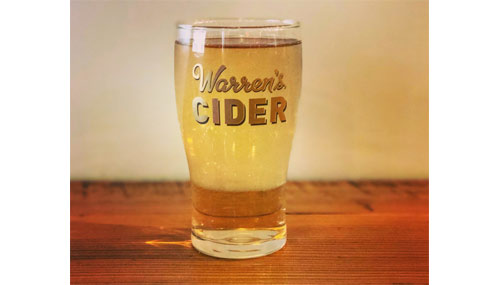 Reuben’s Brews of Seattle recently announced that they’ve branched out and are now producing cider. The result of this new project is Warren’s Cider. Not long ago, this would have been a lot more complicated, but a change to one of Washington’s liquor law that forbade a brewery from making cider, and vice versa, have simplified things.

The short version, Reuben’s Brews was named after Adam and Grace Robbing’s first son, Reuben, but now Reuben has a little brother, Warren. It wouldn’t be fair if Warren didn’t have something named after him too.

“We’re very excited to announce that we’ve made our very first cider,” the company said in an email. “This is the first release from Warren’s Cider, a new project from Reuben’s Brews. This cider company is named for Reuben’s little brother, Warren. Adam and Grace (owners at Reuben’s Brews) have long thought that if his big brother has his own brewery, Warren needed his own cidery. And this is how Warren’s Cider was born.”

According to Adam, “We wanted a drinkable, balanced cider, that you could enjoy a couple of pints of – just like those ciders available back in English pubs, but with a “new world” flair. It was the Pub Cider I wanted to drink. One that tasted of apple, had an element of tannin, and wasn’t bone dry or overpoweringly sweet. A drinkable Pub Cider.”

“Our Pub Cider is medium-dry, 6% ABV, and uses only Pacific Northwest apples. A light tannin structure gives it balance to each sip. It is a nice, refreshing cider that’s drinkable, and not too sweet.”

If you want to know more about how Warren’s Cider actually came to be, click here.