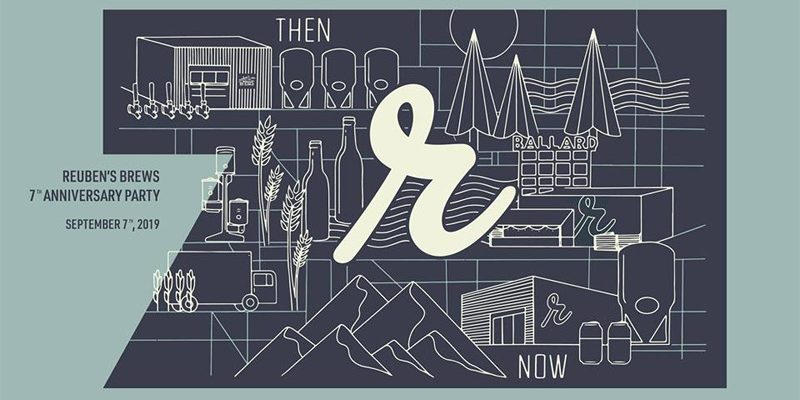 I remember visiting Reuben’s Brews for the very first time. It was the brewery’s opening weekend, which seems so long ago. The brewery/taproom was tiny, furnished with tables and seating designed to fold up and make room for the brewing equipment. One small space housing both production and retail. I also remember thinking, “A stylized version of the letter R is a good place for a Seattle brewery to start.”

A lot has changed for Reuben’s Brews in the past 7 years, which expanded its footprint to include at least three different locations in the neighborhood. The one constant through the years, great beer. The company celebrates the anniversary at its three locations in Ballard on Saturday, September 7th.

Festivities will feature brand-new beers as well as some classic Reuben’s Brews beers on tap. Add to that tasty food, live music, giveaways, and more. New beer release:  cans of “Then and Now 7th Anniversary IPA” will available at The Taproom (the main taproom on 14th) starting at 11:00 AM, featuring a unique label that will reveal the new Reuben’s Brews’ design refresh.

Here’s what the brewery has planned: