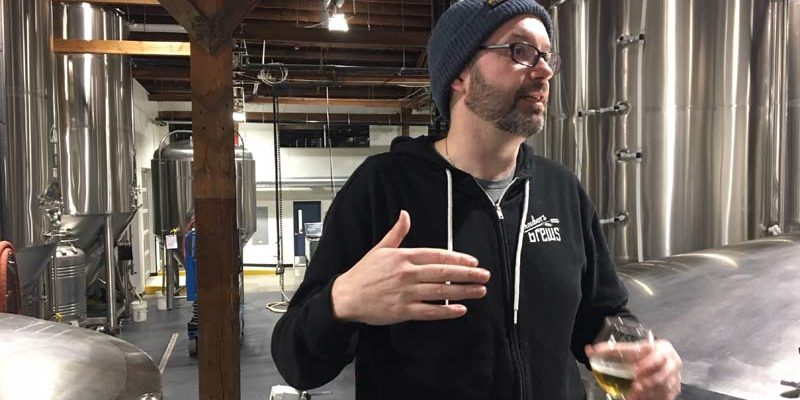 On the local beer scene, it is probably considered a star that has already risen, but Seattle’s Reuben’s Brews just earned the Brewbound Rising Star Award for 2019. Not merely a local or regional award, the Brewbound Awards consider all breweries in the USA. The honor was announced yesterday at that the annual Brewbound Live conference. Brewbound is a beer industry trade publication providing comprehensive information about the beer space, analysis of industry trends and in-depth interviews with industry leaders.

“We are honored and humbled to have won the Rising Star Award out of almost 8,000 craft breweries in the United States,” said Adam Robbings (pictured above), Co-Founder and Brewmaster at Reuben’s Brews. “This award is a testament to our team’s hard work and dedication to craft, which has guided our thoughtful expansion path as well as our innovative, creative lineup of beers. We’re thrilled to share our success and this recognition with the entire Reuben’s Brews team.”

The story behind Reuben’s Brews is familiar to many Seattle area beer lovers. Adam Robbings and his wife Grace opened the brewery in 2012 after Adam’s homebrew garnered some serious local acclaim The brewery was named after the couple’s then-infant son, Reuben. Since then, the brewery has grown consistently and earned seemingly countless local, national and international accolades.

“Adam and Grace Robbings are building a brand to watch in one of the most competitive craft beer regions in the nation,” said Brewbound editor Justin Kendall. “Brewbound is honored to recognize the work of Adam and Grace, as well as their entire team at Reuben’s Brews, by adding them to the 2019 class of Rising Stars.”

Since 2014 the Brewbound Awards have acknowledged breweries for their execution of various sales, marketing, and philanthropic initiatives. The awards recognize large and small beer companies, as well as notable industry figures, for their impact on the industry. Brewbound’s recognition of Rising Stars is meant to acknowledge up-and-coming companies that are thriving and differentiating themselves in an ultra-competitive business climate.

One of the fastest-growing breweries in a region replete with breweries, Reuben’s Brews currently operates two taprooms and three breweries, all in Seattle’s brewery-rich Ballard neighborhood.