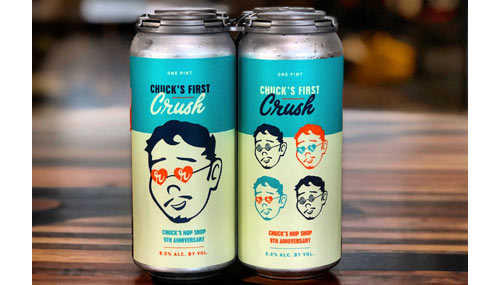 Chuck Shin was one of the first entrepreneurs around Seattle to introduce the idea of the beer-focused convenience store. Basically, converting an old corner market into a beer mecca at the corner of NW 85th Street and 8th Ave NW. That was nine years ago. To commemorate the milestone, Reuben’s Brews is producing a beer for Chuck’s Hop Shop (aka, Chuck’s 85th). It will be released this Saturday.

Here’s the announcement from Reuben’s Brews:

We also have some pretty awesome swag to celebrate the release of this beer and our friends’ anniversary. Glasses and stickers will be available at the Taproom, and Chuck’s will have a limited amount of T-shirts for sale as well.

Stay tuned for what CHUCK’S SECOND CRUSH might be! This will be released not too far in to the future.

We’re honored to brew with the fine folks from Chuck’s, who’re stalwarts of the Seattle beer community. Happy Anniversary!