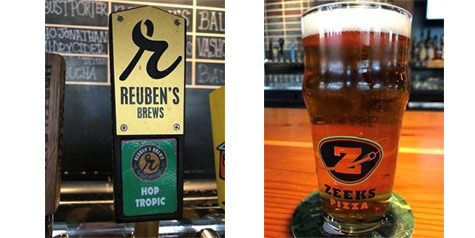 When a brewery teams up with a restaurant to create a “house beer,” it is most-often something less than spectacular. Often, such beers are uninspired and short-lived. That’s not the case with Reuben’s Brews, Zeeks Pizza, and Hop Tropic IPA. That business partnership, and that beer, recently celebrated five award-winning years.

This is a guest post, composed by Tommy Brooks of Zeeks Pizza, the local pizza chain with an uncommon affection for local beer. It originally appeared on the company’s blog. It includes an interview with Reuben’s Brews co-founder and master brewer, Adam Robbings.

I met Adam and Grace Robbings, founders of Reuben’s Brews, at the PNA (Phinney Neighborhood Association) annual winter beer fest in 2010. At the time, Adam was a homebrewer without a commercial brewing license (PNA Winter Beer Fest used to allow homebrewers to participate). Adam and Grace poured two of Adam’s initial homebrew recipes: Roasted Rye IPA and Imperial IPA, which are beers still brewed on occasion and still stand out in a sea of beer 10 years later.

It was immediately clear that Adam was brewing beers that were unique in style and quality; an “Ah-Ha” moment in my own personal beer journey.

In 2012, Reuben’s Brews went commercial and opened a tiny brewery and taproom in Ballard. It immediately became my go-to spot for the best beer in town. I couldn’t wait to get their beer flowing at Zeeks, and soon after Reuben’s opening Adam was hand-delivering kegs of Imperial Rye IPA at our Phinney, West Seattle, Belltown, Ravenna, Dravus and Greenlake locations. This was before they had tap handles, so Adam gave us generic handles that we attached Reuben’s coasters to.

This was the real beginning of the evolution of our beer program in that Adam’s beers stood out from the rest in Seattle and certainly the other beers we were pouring at time. It was also the beginning of our program being relationship-driven with suppliers. From 2012-2014, we rotated different Reuben’s beers at our restaurants. As Adam and I got to know each other better, we started collaborating on a house beer for Zeeks. We wanted it to be hoppy, lower in ABV than most IPA’s at the time, and food-friendly. Adam created a recipe that was ahead of its time – heavy on late addition aroma hops (primarily Citra & Amarillo), low in bitterness, and soft in body (oats were included in grain bill).

Flash forward to February 2015 to when we celebrated our first pint of Hop Tropic at Zeeks. Five years and thousands of pints later, we are celebrating Hop Tropic’s 5-year anniversary! Few beers have that type of staying power in today’s craft beer world, and we could not be more proud of the beer and the partnership.

During those 5 years, Hop Tropic has won multiple awards:

It is a stoker to look in the rear-view mirror and celebrate Zeeks and Reuben’s growth together over the years. Reuben’s is no one of the largest and most decorated breweries in the PNW, and has won over 200 medals. And Zeeks has opened nine restaurants in that time, with more on the way.

We recently sat down with Adam and asked him some questions about Reuben’s, Zeeks, and Hop Tropic.

WHAT IS YOUR BEER PHILOSOPHY?

We wrap everything around the phrase “Beer Unbound.”  This takes four key pillars:

Glass backwards – we focus on what we want to be in the glass, unbound by production constraints or efficiencies.  Everything we do is with the intention to make the beer in your glass the best it can possibly be. As an example, our porter uses 8 different grains.  We could homogenize this down to say 3 or 4, and it would still be a good porter – but it wouldn’t be the best we could make it.  We only change recipes to make a beer better.

Breadth – we do not constrain ourselves to just a handful of “flagship” beers.  We brew many, many different styles.  We have 3 brew houses all at different sizes so we can brew batches the right size for the right beer. We brewed 170 different beers last year – I’m not aware of another brewery in the state that has brewed more!

Education – our co-founder (and my wife) grace used to be a teacher, so our desire to help people on their beer journeys goes without saying! We want to make beer fun, and if we can help people appreciate new styles, new beers, or understand beer better, than that’s a big part of us doing our job well we think.
Balance – this is the most important thing in our recipe formulation.  All beers are driven by balance. Our most hoppy beers must have a strong enough malt backbone to support them.  Our malt forward beers – like a Pilsner – must have enough bitterness to provide balance, and a yeast profile that highlights the great malts used. Balance is key – and I think it’s supported by us winning more awards for our beers than any other brewery in the state since we opened

WHAT IS IT ABOUT YOU, OR YOUR PROCESSES, THAT ALLOWS REUBEN’S TO CONTINUALLY PUT OUT GREAT BEERS?

I think this all goes back to balance. IPAs need a malt backbone to support them.  Sours need to be balanced tartness, not enamel stripping acidity! We focus on balance, which I think is why our beers should all be approachable.

WHAT DOES HOP TROPIC MEAN TO YOU? WHY COLLABORATE WITH A PIZZA CHAIN?

Zeeks is a PNW institution, and they were one of our very first customers.  I remember delivering kegs to Zeeks West Seattle and Phinney myself in my car soon after we opened! I first met Tommy in 2010 when Grace and I were home brewers at the Phinney Beer Taste, and so we knew each other before Reuben’s was even a commercial brewery. For me, when he asked us about Hop Tropic and we had the capacity to brew it we absolutely couldn’t resist! To brew a beer for a great PNW restaurant, and for someone who has supported us from the start, was a great move.

IN YOUR OPINION, WHAT IS THE PERFECT BEER(S) TO PAIR WITH A SPICY PIZZA?

You usually want a strong beer to hold itself up to a strong food.  Bitter and spice are often paired together, so an IPA would be a good choice.  Hop Tropic should be a great option!

WHAT DO YOU LIKE TO DO WHEN YOU ARE NOT WORKING? WHAT GETS YOU TRULY STOKED?

Running the brewery is more than a full time job, so what little spare time I get I usually spend with my family – we have two boys that are a lot of fun. I play golf, and am teaching our youngest Warren how to play right now. Apart from that, right now I’m really into baking bread – it’s similar to brewing in that you use grain, yeast, run fermentations – and craft bread is so much better than macro-produced bread!