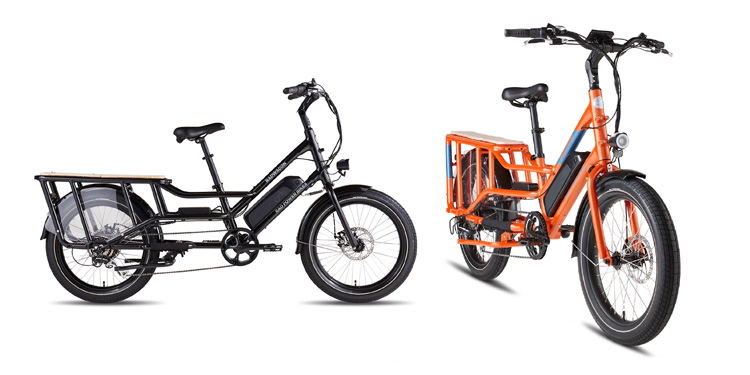 If you’ve frequented the Ballard brewery scene, then you are at least vaguely familiar with Rad Power Bikes. The company’s showroom is situated right between Obec Brewing and Stoup Brewing on 52nd Street NW. As you’ve enjoyed a tasty pint, perhaps you’ve noticed people taking bikes for test rides and wondered, “What’s that all about?”

Seattle-based Rad Power Bikes is North America’s largest ebike brand, offering a wide range of electric bikes for personal and commercial use. The Washington Beer Blog is happy to have them aboard as a sponsor.

Yes, electric bikes are very appealing for personal use, especially in a town like Seattle that offers so many hills to navigate. As far as managing Seattle’s epic traffic, ebikes make a great alternative for commuters, too. Rad Power Bikes has helped usher in a new term that we should all get used to: car-replacing bike.

On top of practicality and utility, an electric bike from Rad Power Bikes is also just fun to ride, so it probably doesn’t take a lot of convincing. Who doesn’t imagine themselves trekking around our urban and not-so-urban environments on one of these babies?

Today (May 21, 2020), Rad Power Bikes unveiled a new model of its popular cargo bike: the RadWagon 4. Perhaps you’ll haul a couple cases of beer home from a local brewery. The RadWagon 4 sports a 350-pound payload capacity and can travel up to an estimated 45+ miles on a charge. 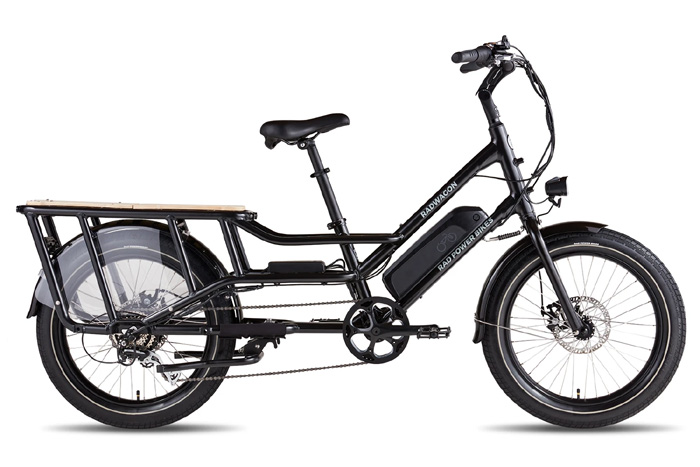 The kind of cargo you choose to haul on your RadWagon might include a child, a spouse, or a friend as you pedal yourself to a local brewery. Modify your ride with a deck pad and running boards and you’ve got a great people hauler.

The fourth generation of the RadWagon was redesigned from the ground up to offer enhanced strength, stability, and versatility. It comes with a geared hub motor that provides twice the torque compared to the direct-drive motor used in previous models. It’s the same motor used on some of the company’s off-road and utility-oriented models, offering more uphill hauling capabilities and more git-up-n-go.

“We went back to the drawing board and looked at all the ways we could improve our beloved electric cargo bike, keeping our customers’ feedback and requests at the forefront of our minds the entire time,” said Mike Radenbaugh, Rad Power Bikes’ Founder and CEO. “The result is a next-level people and cargo hauler that’s essentially a brand new cargo bike. With a patent-pending frame design, custom tires, and more adjustability than ever before, the RadWagon 4 is the raddest car replacing bike we’ve ever created.”

As with any bike, the fun factor cannot be ignored; however, there’s something else to consider. Namely, electric bikes for commercial use. Imagine a brewery delivering kegs around town on an electric cargo trike from Rad Power Bikes. No problem. 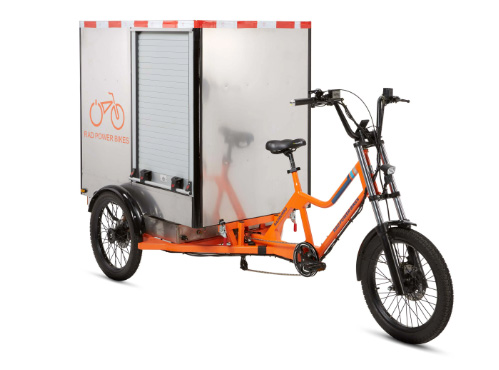 A RadBurro electric cargo trike offers a whopping 700-pound payload capacity. It will travel an estimated 40-80+ miles on a single charge. Pictured above with a cargo box, these trikes are highly customizable to meet your needs. Flatbed and truckbed are also available. A cargo box on the back, branded with your brewery’s logo, would certainly get a lot of attention.

Rad Power Bikes offer a number of different models, most in the $1,200 to 1,500 range. Commercial bikes, like the RadBurro, are highly customizable and therefore the prices vary. The showroom in Ballard is temporarily closed due to the pandemic and they’ll reopen as soon as it is safe and wise to do so. In the meantime, you can still shop online at www.radpowerbikes.com.