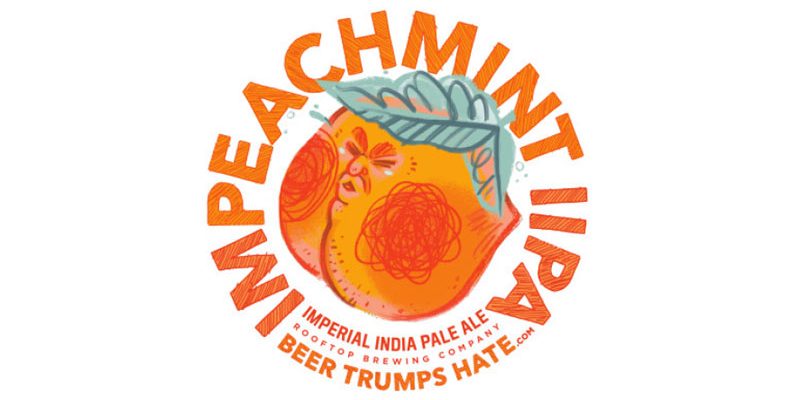 Rooftop Brewing will host a party at its taproom in Seattle on Thursday, December 19th to commemorate the release. You will find more information about the beer, its release, and the ongoing campaign in the press release below.

Seattle, WA, December 16, 2019– Rooftop Brewing Company, LLC (Rooftop) is excited to announce the release of ImPeachMint IIPA in 16oz cans as part of its ongoing Beer Trumps Hate Campaign. Proceeds of the sale of this beer throughout the month of January will be donated to Fair Fight 2020 and Queen Anne Helpline. In addition to the beer, Rooftop will sell ImPeachMint IIPA T-shirts and stickers at its tasting room located at 1220 W. Nickerson St., Seattle and online at www.beertrumpshate.com, and donate the proceeds of those sales.

Rooftop will celebrate the release of ImPeachMint IIPA in cans on December 19, 2019 with swag giveaways and opportunities to donate to the non-profit organizations. Rooftop will also host events at local bars and restaurants to raise awareness and additional funds for the non-profits You can keep up with these events through the Beer Trumps Hate Facebook page.

ImPeachMint IIPA (8.8% ABV, 72 IBU) was brewed with Azacca Hops and real peach puree to provide a
wonderful bouquet tropical fruit and peach flavors. Fresh mint was used in the dry-hops to give a more
effervescent character, but mostly to complete the allegory. Imp. Peach Mint IPA will be sold in bars and
restaurants throughout the Seattle area, as well as in Rooftop’s tasting room.

Beer Trumps Hate was started in 2017 by Rooftop Brewing Company in response to the negative
rhetoric pervasive in the national political environment. Rooftop believes that beer and community go hand in hand. This concern has motivated Rooftop to use its beer, space, and the beer drinking community to do something to bring people together in the name of love of beer! Under the Beer Trumps Hate campaign, Rooftop will host events to raise awareness of local non-profits, and donate proceeds from the sale of Beer Trumps Hate beer and swag to those organizations. The Beer Trumps Hate campaign social media and swag will be used to promote awareness and raise additional funds for that organization – and drink some delicious beer along the way! www.beertrumpshate.com

Queen Anne Helpline was formed in 1982 after a local grocery store owner realized that many seniors were buying pet food to eat because it was all they could afford. He teamed up with other community leaders to establish the Queen Anne Helpline, a neighborhood model that proved so successful several other Helplines were established around the city. By providing financial and other basic needs assistance to residents of the Queen Anne, Magnolia, and South Lake Union neighborhoods, the Helpline ensures that several thousand people annually have secure housing, are able to pay their utility bills, and have adequate food and clothing. www.queenannehelpline.org

The 2020 election will carry historic consequences. But foreign interference and sophisticated voter suppression threatens our ability to freely elect our leaders. If we start early and work together, we will ensure that every American voter’s voice is heard and that Democrats up and down the ballot win.
Fair Fight 2020 is building voter protection teams with local allies across the country to protect the right to vote—and we’re starting now. Sign up today to ensure that 2020 is a Fair Fight.  https://fairfight.com/fair-fight-2020/

Rooftop Brewing Company was started by five friends as a 1 barrel brewery in a small garage in an alley behind 7-11 in Queen Anne. Now a 15 barrel brewery located on Nickerson St. in Seattle, WA, Rooftop brews beers we like to drink, and we hope you will too. Rooftop beer may be found in our tasting room on Nickerson St. and at local restaurants and bars in the Seattle area. Rooftop believes that beer can play a big part in great conversations, great friendships and great moments. It’s better on the roof.
www.rooftopbrewco.com