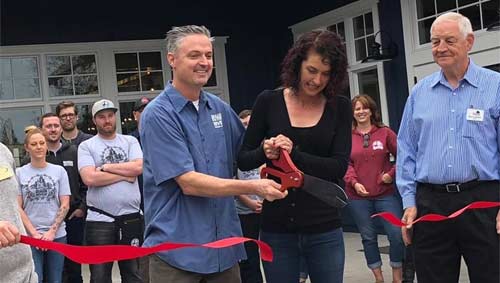 Last Thursday, October 11, Russian River Brewing Company opened a new, huge facility not far from its existing brewery and pub in Santa Rosa. More than a second, larger brewery, this is a beer mecca and further establishes Russian River as one of the nation’s top beer tourism destinations. Pictured above, co-owners Natalie and Vinnie Cilurzo cutting the ribbon at the new location (photo from Facebook).

Among other things, the new facility in Windsor, California allows the company to increase production and handle much larger crowds for things like the annual release of Pliny the Younger, an event that attracts more than 16,000 beer lovers each year. The original brewery and pub in downtown Santa Rosa remains unchanged.

The beloved brewery made a business decision back in 2013 to stop distributing beer to Washington, citing that the they simply did not have enough beer. Will the addition of a new, larger brewery mean that beers from Russian River Brewing will once again make it to Washington? Sadly, that remains to be seen. It will likely take a while for them to fully ramp-up production, but once they do, they’ll have to sell all of that beautiful beer to someone.

The new brewery will not only increase capacity, but also foster creativity. It includes some open-top fermenters (new for Russian River) and a dedicated “funky brewery” where they’ll make nothing but fruited, sour and other funked-up stuff. Yep, they’ve now got a koolschip too.

Here are some highlights: