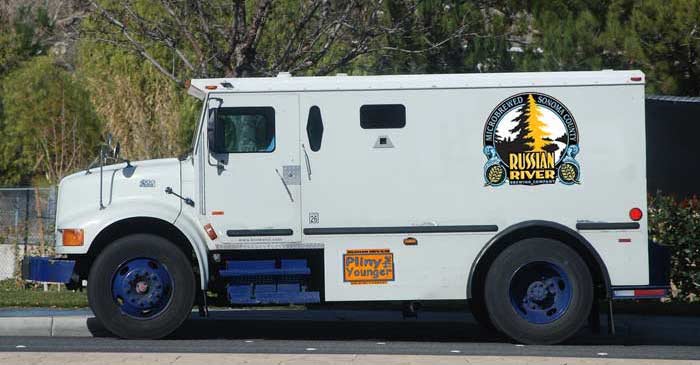 The announcement came on Christmas Eve via the company’s blog. It was then socialized on Facebook and Instagram. This year Russian River Brewing will package one of its most venerated beers in 510-milliliter (17.2-oz)  bottles. For the 16th year, Russian River Brewing releases Pliny the Younger Triple IPA in February at both of its brewpubs in California (Santa Rosa and Windsor). This year, they’ll bottle it. Customers will be limited to two bottles each. A wristband with removable tags will track bottle purchases.

Every year thousands of people make the pilgrimage to Russian River Brewing for the annual Pliny the Younger release event. This year’s celebration is from February 7th through February 20th (read more about it here). It’s a big deal, contributing over $4 million to the local economy. If you want to know more about the economic impact of Pliny the Younger’s release, read our previous story. It’s impressive. 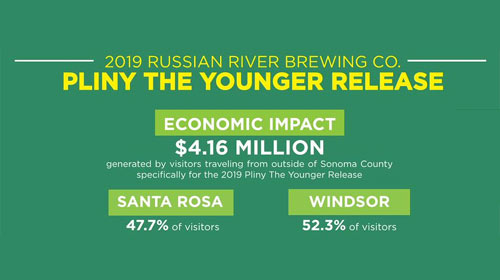 Alaska Airlines flies direct from Seattle to Santa Rosa. I just checked and you can do it for about $79 each way. In the event that Pliny the Younger bottles reach the online beer reselling market, an oxygen mask will drop from the ceiling. Just sayin’.

At the end of 2012, Russian River Brewing stopped distributing beer to Washington, including the beloved Pliny the Younger and Pliny the Elder, not to mention all of the other fantastic beers the brewery produces. There were legitimate business reasons. It was nothing personal. Natalie and Vinnie, the owners, explained it in a letter that we published here.

No doubt, some people will see this latest development in the Pliny story as a way to make a couple of bucks. Two-bottle limit? I expect some entrepreneurial beer traders will find a way to work the system and put the precious nectar up for sale online. The bottled beer will not be distributed and will only be available at the two Russian River Brewing pubs and only to people who have come for the release event. That is, not at the gift shop like other Russian River beers.

Here’s the announcement from the Russian River Brewing blog:

This February we celebrate the 16th annual Winter release of our popular Triple IPA, Pliny the Younger. Always released the first Friday in February (rain or shine, but mostly rain), Younger will be available at both brewpubs February 7th-20th, 2020.  Each year thousands of visitors from all over the world descend upon Santa Rosa, and our new Windsor location as of last year, to enjoy not only Pliny the Younger but other popular Russian River brews like our barrel-aged sours, Blind Pig IPA and our flagship Pliny the Elder. In 2019, the Sonoma County Economic Development Board conducted a study which determined that the two-week release saw visitors from 42 states and 14 countries and contributed $4.16M to the local economy!

It is important for us to find ways to add to our guest’s experience, especially for those who come year after year. We are excited to announce that Pliny the Younger 2020 will include something we have never done before, and said we would likely never do. For the first time ever, Pliny the Younger will be available in our signature 510ml bottles during the release at both our Santa Rosa and Windsor breweries! Each guest will be able to buy 2 bottles which we can track by a fourth tab on the wristband they receive upon entering the pubs. Pliny the Younger bottles will only be available to guests who come for the full experience in our brewpubs and will not be sold in the gift shops. Younger bottles will not be distributed, while draft distribution begins the second week of February.

Also new this year is an exclusive Pliny the Younger preview beer dinner which sold out in a matter of hours!  We will definitely be doing that again next year. And a generous pour of Pliny the Younger will be offered again on our guided tours now booking on the brewery’s website. For more information regarding the beer, the man, and the release, check out our website russianriverbrewing.com.