If you do a Google search for the term Schooner Brewing or Schooner Exact Brewing, you may be saddened by the search results. It is almost as if the brewery never existed. I would be heartbroken if I hadn’t seen this coming.

The saga, the drama, seems to be drawing to a close. Publicly, it started when Heather and Matt McClung “left” the company a couple years ago, which sent shivers of discomfort through the local beer industry. 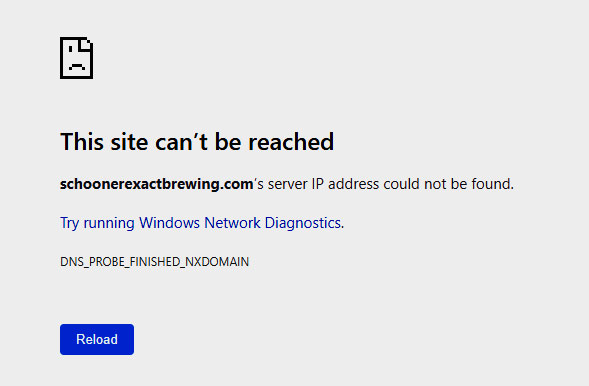 Leading up to this, and throughout the last few years of Schooner Exact Brewing’s history, the company was undergoing some struggles and trying to reinvent itself. A couple of temporary closings, facelifts, and re-openings. Partnerships with local restauranteurs. Oye, it didn’t look good. It all seemed rather desperate for a company that had expanded its brewing capacity way beyond all financial reason, presumably following some really, really bad advice.

Back then, when I learned about this latest development from a reliable source, it seemed clear to me that the end was near for the brewery that was started in 2006 by Heather and Matt McClung in an Active Space unit in West Seattle.

I just checked with the State Liquor and Cannabis Board and the brewery is still licensed as Schooner Exact Brewing. Perhaps this is only because there is already a brewery named San Juan Brewing Company (the one that makes beer in Friday Harbor). I’m not sure how it would work if you applied for a license as San Juan Seltzer. Don’t care.

I am not suggesting that Schooner Brewing is completely done, or that its beers will no longer be available. I don’t know about that. Truth is, they are already dead to me. Not because of my personal relationship with the McClungs (though I would not apologize for that) and not because of any other personal, spiteful reason. Rather, the brewery formerly known as Schooner Exact Brewing is dead to me because it no longer exists on Google. Hell, the websites are dead and the domain names are abandoned.

Anyway, now the transformation seems to be nearly complete with the announcement of the opening of the San Juan Seltzery Taproom, Kitchen & Bar. The location is, as you may have guessed by now, the same location that beer lovers recognize as Schooner Exact Brewing’s old location.

I wish them luck. A “Seltzery Taproom, Kitchen & Bar” is a new and interesting concept. The new business may be open now, it may be opening soon. Don’t know. Don’t care.

Apparently, you can get a beer at the new Seltzery Taproom, Kitchen & Bar. I assume that, for now, it is a Schooner Brewing beer. That is an assumption.

Here is the press release announcing the opening of the San Juan Seltzery Taproom, Kitchen & Bar.

With seating for 40, plus six at the bar, the1000 square foot restaurant will have a light and airy on the water vibe and feature weathered wood tables and chairs. A 400 square foot heated patio offers an additional 20 seats, Adirondack chairs, and a fire pit, giving the outdoor space a welcoming feel year round. Look for a television or two for catching the game, as well as a designated play area for kids.

The all-day menu will focus on shellfish and include items like Cod and Chips, Dungeness Crab Cakes, Steamed Clams, Fried Oysters, Oysters on the Half Shell, Moules Fries, and San Juan Clam Chowder. There will also be options like a SoDo Burger, Hanger Steak Salad, Cobb Salad, and Caesar Salad.

The bar program will showcase San Juan Seltzers—made from fruit grown in the PNW, these all-natural spiked seltzers are gluten free with only 85 calories and with zero sugar and zero carbs— as well as classic cocktails and cocktails made with San Juan Seltzer. In addition to the full bar, beer will be offered on tap and the wine program will include NW wines from neighboring tasting rooms within the SoDo Urbanworks complex. There will also be two non-alcoholic seltzers from San Juan Seltzer, as well as iced tea, sodas, and espresso options for the lunch time crowds.

“I couldn’t be more excited to share everything our Seltzery has to offer,” says Katy Enger, Founder of San Juan Seltzer. “The taproom, kitchen and bar are going to be fun additions to our production facility experience. It will be a laid back place with great atmosphere for locals and visitors alike to gather and enjoy drinks and food that represents the Pacific Northwest lifestyle.”

San Juan Seltzer, the first Pacific Northwest-based spiked seltzer company, debuted in 2018 with the lowest calories of any hard or spiked seltzer on the market at 85 calories, zero sugar and zero carbs per 12-ounce serving. Each can is all-natural and gluten free with 4.2 percent alcohol by volume (ABV). Founded by Katy Enger in 2017, each flavor is inspired exclusively by fruit grown in the Pacific Northwest. All flavors are available on tap at San Juan Seltzery Taproom, Kitchen & Bar in SoDo and in cans and on draft at nearly 2,400 PNW locations on and off premises, at outlets like the Space Needle, The Portland Zoo, Washington State Ferries, The Ballroom (Fremont), Point Defiance Zoo (Tacoma), Amazon Go, Costco, Metropolitan Market, QFC, Whole Foods, Haggen Markets, Safeway, Albertsons, and PCC Community Markets. Enjoy the San Juan Island lifestyle wherever you go! Learn more at, sanjuanseltzer.com.