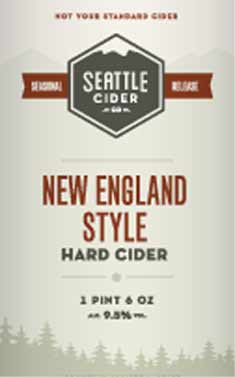 In addition to its regular offerings (Semi-Sweet Cider and Dry Cider) the company also offers specialty and seasonal ciders. The first seasonal it released, Gin Botanical, was scrumptiously aromatic and effervescent. The Gin Botanical wasn’t really a seasonal as much as it was a specialty released for the grand opening. It will make it into the seasonal rotation eventually. The first real seasonal the company release was the Pumpkin Spice cider, which was slightly sweeter and befitted the autumn. Now, for the winter, Seattle Cider Company announces the release of New England Style Cider. Here is the press release introducing the new cider.

SEATTLE (December 3, 2013) – Seattle Cider Company, Seattle’s first and only cidery since Prohibition, is excited to announce the release of its second seasonal cider. Available in 22-ounce bottles now through February, Seattle Cider’s New England style offers a unique flavor profile, fermented with brown sugar and raisins, and 9.5 ABV. This pre-Prohibition style cider joins the growing cidery’s two year round ciders – Dry and Semi-Sweet, available in 16-ounce cans – on shelves and on draft throughout Washington state and Alaska beginning today.

“With cool temps and holidays upon us, this powerful cider offers flavors and an ABV sure to keep bodies warm and spirits high,” said founder and head cidermaker Joel VandenBrink, also known for his role as founder and head brewer at Two Beers Brewing Co. “Our first seasonal, a Pumpkin Spice cider, was an overwhelming hit and we anticipate the New England style to be no different. It’s been exciting to see the quick growth and support for both Seattle Cider and the cider industry as a whole. ”

A semi-dry cider, Seattle Cider’s New England style cider harkens back to the days of covered wagons and pioneers. Mahogany in color and fermented with a unique combination of brown sugar and raisins, it offers notes of vanilla, oak and a clean toast, making it perfect for cold winters and taking on the hazardous new world. Offering a 9.5 ABV and just 1.2 Brix, this robust cider is still dryer than most ciders found on the market today. Pick up 22-ounce bottles at specialty bottles shops and grocery stores throughout Seattle, including Beer Junction, Chuck’s 85th and Whole Foods. For a full list of locations, visit seattlecidercompany.com (subject to change and availability).

Seattle Cider’s initial offerings – Dry and Semi-Sweet – also break the mold of overly sweet cider, bringing the natural flavors of Washington apples to the forefront. Naturally gluten free and made from a custom blend of fresh pressed, Washington apples, Seattle Cider’s products are handcrafted with all natural ingredients, never from concentrate. Seasonal ciders, such as the New England style, are to be released each quarter, offering unique and unexpected flavor profiles geared toward the season.

Find Seattle Cider products in stores and on tap throughout Washington state and Alaska, with growing list of locations available at seattlecidercompany.com. Expansion to Oregon and Michigan expected for January. Tastings and pints are also available at The Woods tasting room in SoDo, which shares the space with Two Beers Brewing Co. For more information, follow Seattle Cider Company on Facebook, Twitter (@seattleciderco) and Instagram (seattleciderco).

About Seattle Cider Company
Not your standard cider. Seattle Cider Company is the city’s first cidery since prohibition, bringing true craft cider back to Seattle. Bridging the gap between wine and beer with flavorful, small-batch cider, Seattle Cider’s initial offerings – Dry and Semi-Sweet – break the mold of overly sweet cider, bringing the natural flavors of Washington apples to the forefront. Naturally gluten free and made from a custom blend of fresh pressed, locally grown apples, Seattle Cider’s products are handcrafted with all natural ingredients and never from concentrate, successfully distinguishing themselves from the mass market cider found in stores today. Available in 16-ounce cans, Seattle Cider products are available at retailers and bottle shops throughout Seattle. Seattle Cider is also available on tap in Seattle-area bars and restaurants, with tastings, kegs and growler fills available at The Woods tasting room, located at 4700 Ohio Ave. S. in SoDo, open weekly Tuesday – Saturday. For more information, visit seattlecidercompany.com, or follow Seattle Cider Company on Facebook and Twitter (@seattleciderco).