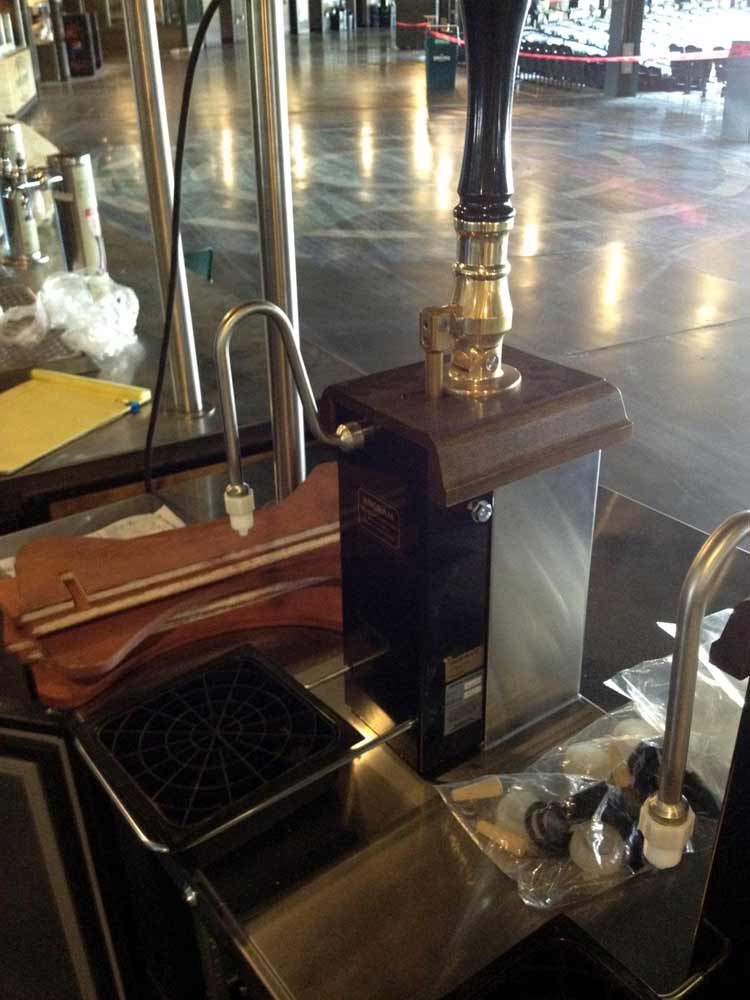 Update April 7: See our more recent post for information about all craft beer at the ballpark.

In terms of fan experience, the home of the Seattle Mariners is widely recognized as one of the best ballparks in Major League Baseball. At Safeco Field, great beer is an important part of that fan experience. The company that manages beer and food at Safeco Field, Centerplate Inc., recognizes that beer is a big deal around Seattle and they want to make sure that craft beer is well represented at the ballpark. (Not an opinion, it’s the truth.) People whine about the price and other aspects of drinking beer at this kind of venue, desperately wishing they lived in an alternate reality, but no one can deny that the beer selection at Safeco is fantastic compared to most other MLB ballparks.

This year Safeco Field is getting even more serious about beer. Ours might be the first ballpark* in modern America to feature cask-conditioned beer** as a regular option. A new beer station behind home plate (main concourse, section 129) will feature two beer engines. A beer engine is a hand-pumped tap used to server cask-conditioned beer, which is also known as real ale in the UK. The cask station will serve a rotating selection of cask-conditioned beer at all of the games.

The cask beer will not likely last the entire game; they’ll use small casks so there isn’t any need to store the brew overnight. Cask-conditioned beer is fragile, so instead of trying to insure that it is properly stored and cared for, they’ll pour from small vessels, which presumably will be drained before the end of the game. In other words, to insure that you get some of the cask-conditioned beer, you’d probably better hit the cask station early in the game.

But don’t worry. In addition to the two state-of-the-art beer engines from Angram LTD, the new beer station will  include two regular, CO2-driven taps. For opening day and beyond, those two handles are scheduled to pour Bale Breaker Brewing’s Field 41 Pale Ale and Goodlife Brewing’s Sweet As Pacific Ale. What a happy coincidence that those are two of my personal favorites.

And that’s not all…

There are additional plans to install a third beer engine at the NW Beer Bar (formerly known as Power Alley), which is located on the main concourse, between sections 133 and 136, around back. Look for the Mariners Hall of Fame. Same thing goes: every game, limited supply. The NW Beer Bar is also a good place to find several craft beers on tap in one location.

How about Firkin Fridays at Safeco Field? Yep, every Friday home game will feature a special pregame event in the center field beer garden. Essentially, a firkin is a keg full of cask-conditioned beer. Usually, the firkin is placed on the bar top and poured directly from the keg, assisted by nothing but gravity. In addition to a firkin of beer, a brewer will be there to talk about the beer. When that schedule gets hammered out, we’ll be sure to share more info.

Careful What You Wish For

In the next couple of weeks I will be publishing my annual beer at the ballpark story. In that post I will tell you where you can find the good stuff at Safeco Field. I just learned from someone who would know (John Tufano of Great Artisan Beverage Co.) that such a post might be irrelevant these days. Literally, you’ll be able to find good beer everywhere at Safeco this year.

My annual post about ballpark brews is one of the most popular posts I do each year. I love putting it together. Kind of sad it’s becoming irrelevant. People tell me that they bookmark it on their phones and use it to navigate the beer selection at Safeco Field. That makes me proud. But, in all honesty, I have always dreamed of a ballpark with too much good beer.

Below is a picture of me and Edgar Martinez. It has nothing to do with this story, I just love sharing it.

** Here is a very basic introduction. Cask ale or cask-conditioned beer is unfiltered and unpasteurized beer that is conditioned in, and served from, a cask (keg or firkin) without additional nitrogen or carbon dioxide pressure. Instead of being carbonated like regular beer, the CO2 in the beer is created by a secondary fermentation that happens in the cask. To the uninitiated, the beer may seem flat. It is not fizzy. When served, the beer is not pushed by CO2 or nitrogen, but rather it is pumped out of the cask using a beer engine or poured out of the firkin using gravity. This is a traditional way of producing and serving beer. Aficionados will tell you that the beer has more character, more-pronounced flavors, and benefits from not being introduced to external gas. Some people love it. Some people don’t.