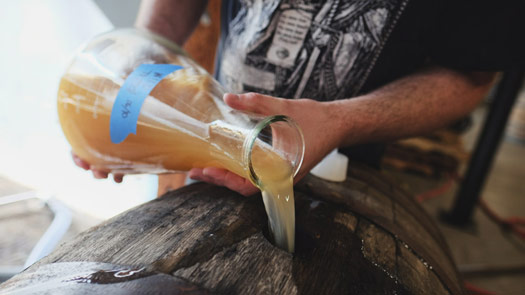 Adam Paysse was one of the founders of, and brewers at, Holy Mountain Brewing. Last year he decided to branch out on his own and start Floodland Brewing in Seattle’s Fremont neighborhood. His plan is to continue focusing on his passion for fermenting and blending dry, hoppy, wild beers. (photo above: Jeremy BeBeau / @ beerscenes.)

“I’m really proud of the work I’ve done in the past, and I’ve been fortunate to have had a lot of fun brewing beers I love, but I felt driven to start Floodland,” Paysse said. “There’s a clarity of vision that I think you can only achieve by running a small operation which speaks with a single voice.”

Although they have not yet started to distribute of serve beer, Floodland Brewing is operating in a 5,000 square foot space in Seattle’s Fremont neighborhood where Paysse will barrel ferment and age his beers: spontaneous and mixed-culture beers, like the saisons and acidic fruit beers for which he is known.

“I’m looking forward to running a focused operation where I’ll have time to work on native fermentations using a coolship, and working with local farmers to source whole fruit for re-fermentation.”

(What’s a coolship? Check out this article.)

Floodland Brewing will operate without glycol or refrigeration, which is used in most modern breweries to control fermentation and conditioning temperatures. This is a rustic approach, hearkening back to a day when brewers did not enjoy such modern conveniences and had to rely on mother nature to direct the fermentation and conditioning of the beer. Paysee says his beers will often undergoing extended aging before being blended and will often be re-fermented on fruit, followed by a final fermentation to condition the beer in the bottle.

“My goal has always been to make beers with a strong sense of intent,” said Paysse. “Fermentation in barrels is about finding a path to create the beers I envision in my head, not about being anachronistic. At their heart these are just very classic styles of beer.”

Brewing operations began in April, and there is no immediate release date for any beers.

“If I’ve learned one thing in the last decade it is that these beers age as long as they need to age.” Usually three to twelve months fermentation and three to six months conditioning can be expected, says Paysse.

”I’d expect the first bottles in the late fall or winter, and beyond that there’s no solid retail or draught plans other than a small bottle club, with tours and tasting for folks who sign up for bottles. These beers are at their best in the bottle, and bottles are what I enjoy the most, so that’s how most of it will be packaged.”