There are a lot of reasons you might decide to visit West Maui, and beer probably isn’t very high on that list. I get it. However, since you’re going, you might as well know where to get the good stuff. Whether you’re snorkeling, golfing, whale watching, or just relaxing, know that great beer can fit into your vacation plan seamlessly.

Kim and I recently enjoyed a ten-day trip to Maui, exploring the island’s western coast. Basically, from Lahaina north, spending a lot of time in places like Ka’anapali, Kahana, Napili, and Kapalua. Of course, our explorations involved beer, as well as a lot of snorkeling and relaxing. It is hard to beat a West Maui sunset, especially with a tasty local beer in hand.

As far as the beer is concerned, we came home with some solid recommendations for finding the best the island has to offer. This advice comes with a couple of caveats. Hardcore beer aficionados should have realistic expectations; most bars, pubs, and restaurants focus on serving the touristy masses and not the beer geeks. Also, you may notice the same selection of mainland craft beers on tap at different locations. Remember that the selection is limited to what is available on an island in the middle of the Pacific Ocean. That said, here’s what we found. (I’ve mapped it all out for you at the bottom of the story.)

To begin with, if you’re looking to load up the fridge at your condo or hotel, you’ll find a lovely selection of Hawaii-brewed beers at Safeway and Foodland, both in Lahaina. While Times Supermarket is where we did most of our grocery shopping, the beer selection was not quite as robust. Beyond that, visit one of the two breweries mentioned below. Both of them sell beer in cans, crowlers, and growlers. 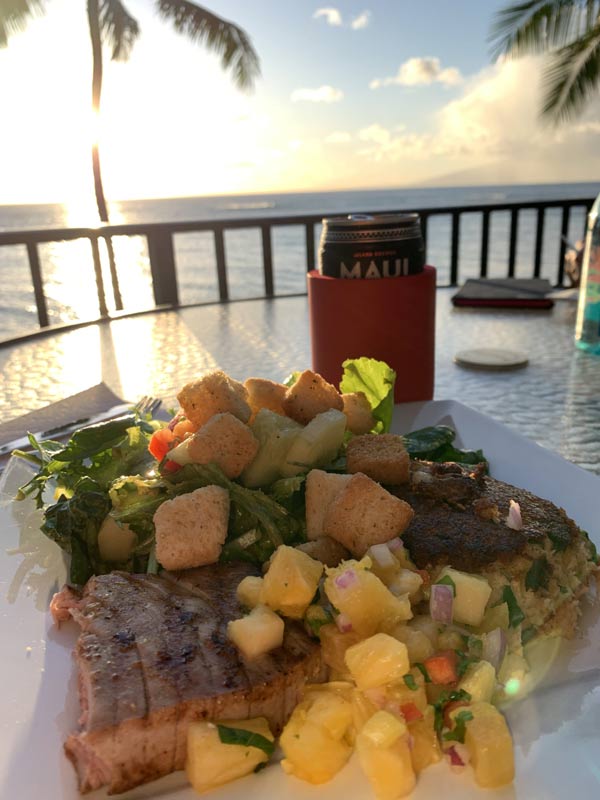 Because of the place we stayed (a condo complex called Kahana Village), it was hard to venture out too much. Our condo on the beach was just too lovely, and we highly recommend Kahana Village Vacation Rentals, so stocking the fridge with beer and food was the best plan of action. Pictured above, beer from the Maui Brewing pub just a quarter mile up the street, served alongside fresh fish and fresh mango salsa from the local fish market (Fish Market Maui) just two miles down the beach.

Maui Brewing – The island’s namesake brewery has grown up a lot in recent years and today operates four restaurants, two on Maui itself and two others on Oahu. The company’s big brewery, which has a bar and restaurant, is in Kihei, so it was not part of our West Maui vacation. If you drink a Maui Brewing beer on the mainland, it was almost certainly brewed at the Kihei facility. Again, that’s not the Maui Brewing location we are talking about here.

Out west, in the Kahana neighborhood, you will enjoy visiting Maui Brewing’s smaller brewery and pub, where they serve a full complement of the brewery’s beers, from the flagship beers like Big Swell IPA and Bikini Blonde to smaller-batch beers brewed on-site, like the Imperial Coconut Porter, which totally blew my mind.

The brewpub is a popular destination for fellow tourists but is also frequented by locals. The busiest time of day is just after sunset when vacationers head inside for dinner. More locals are likely to hit the pub later in the evening after the dinner rush subsides. 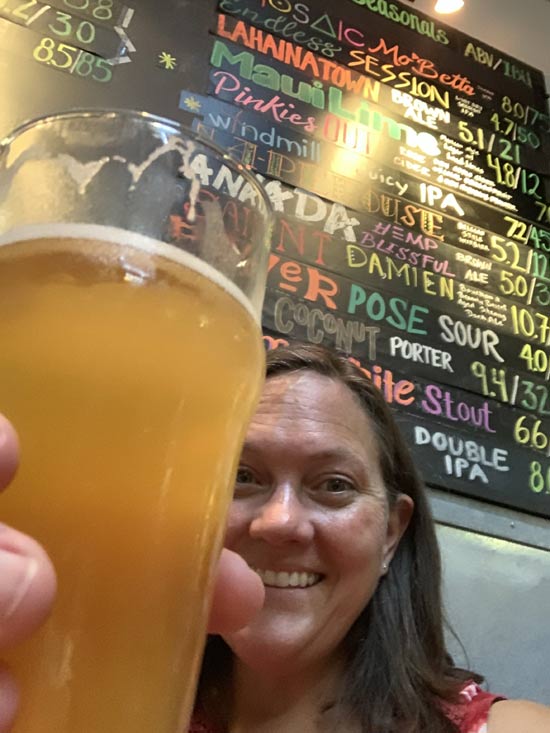 The pub is tucked away in the corner of a small strip mall but is actually bigger inside than it looks from the outside. The menu is not surprising, sporting lots of typical pub grub, like burgers, sandwiches, and salads, but always ask about the fish of the day. After all, you are on an island in the middle of the Pacific Ocean.

Kohola Brewery – Located in an industrial building, just off the main highway through Lahaina, Kohala Brewing occupies the space that served as the original home of Maui Brewing. It is a production space, not lavishly decorated or furnished, but serves its purpose well. Most importantly, the beer does not disappoint. Beer is available to go, packed in cans, crowlers and growlers. On this vacation, our fridge was pretty much always stocked with Waterman IPA and Talk Story Pale Ale. 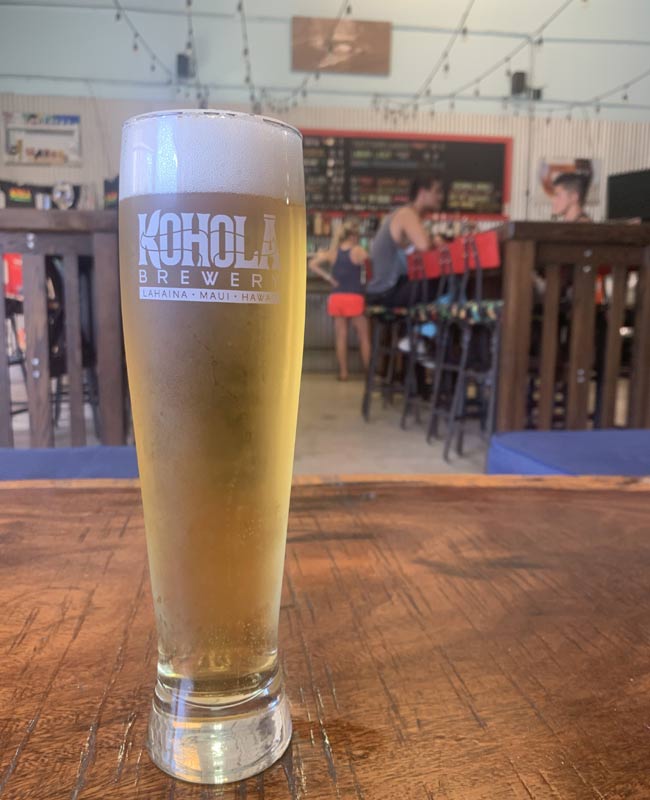 They don’t serve food at the taproom, though we enjoyed a meal from a pop-up restaurant that was serving, of all things, Australian-style meat pies. There’s a taco truck located across the parking lot and you are welcome to bring food with you. 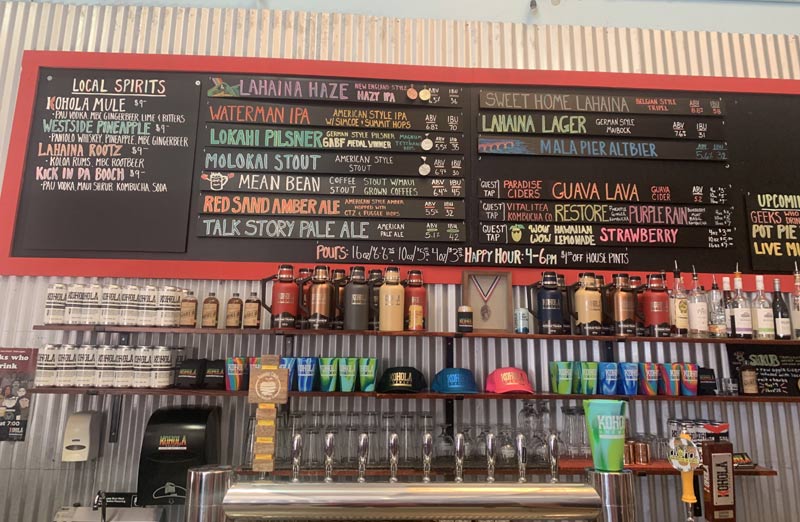 Kohola Brewery is not located in a touristy part of town. Beyond the locals, this place seems reserved for beer-focused travelers. In other words, we were not the only pale-skinned mainlanders drinking flights of sample-sized beers. It can be a bit tricky to find, but it’s worth it. There’s a small, old strip mall along the highway and the brewery is located in the industrial buildings immediately behind the strip mall.

Monkeypod Kitchen by Merriman is located in Whalers Cove, an upscale, open-air retail mall located between the Kaanapali golf course and Kaanapali Beach. If you get the right table, inside or out, you’ll have amazing ocean and sunset views. The restaurant’s concept, conceived by noted Hawaiian chef Peter Merriman, includes an impressive focus on beer. Good beer. More than a dozen tap handles pouring mostly craft beer—a mix of on- and off-island beers. 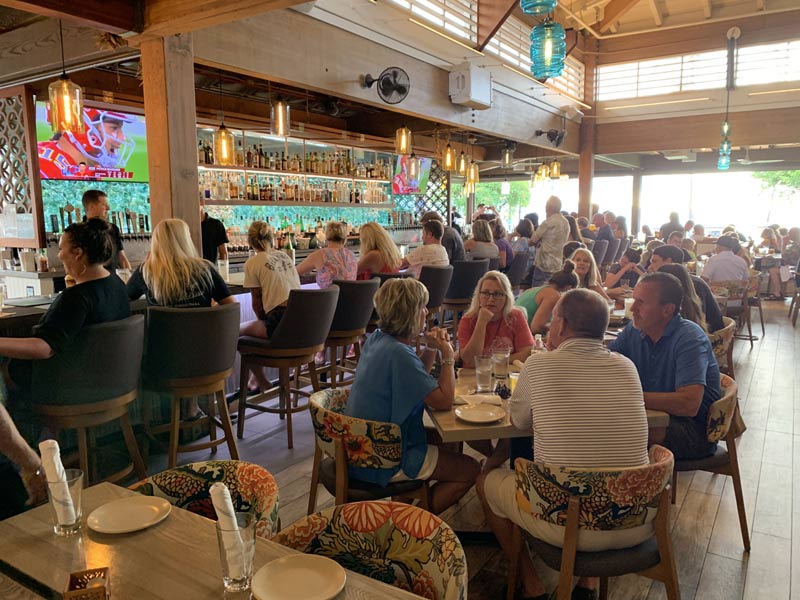 Taverna Italian Eatery at Kapalua is an Italian-focused bistro and bar sporting a surprisingly good draft beer list. Located at the immensely beautiful Kapalua Bay Course, the restaurant is located in the clubhouse, basically, though calling it a clubhouse doesn’t do it justice. The food is much better than you typically find at a clubhouse, as is the beer selection.

Whatever your excuse for going to visit West Maui, make beer part of the trip. After all, what’s paradise without beer?