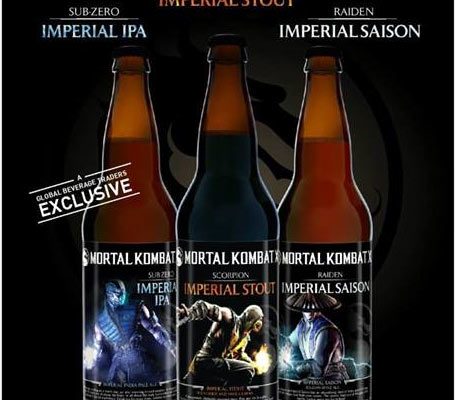 I first learned about this project back in June (maybe you did too), but quickly recognized that there wasn’t much use in telling you (our readers) about it. Now that the beer has been officially released, I suppose it’s only fair to tell you that Sound Brewery of Poulsbo, Washington created a series of Mortal Kombat beers, named after three of the iconic video game’s characters: Scorpion Imperial Stout, Raiden Imperial Saison and Sub-Zero Imperial IPA. Seriously, licensed by Warner Bros. and everything! 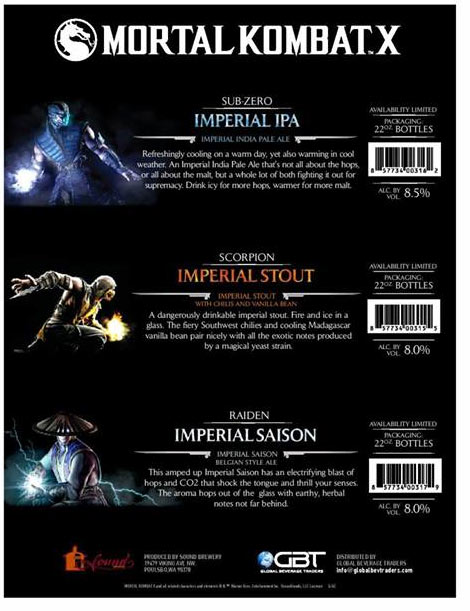 The beers are being released now in Southern California to coincide with San Diego’s mammoth Comi-Con event, which is happening right now. Below we share the press release from Global Beverage Traders, which is distributing the beer.

As a former Mortal Kombat addict, I think this is supremely cool. Jax was my man! When I first heard about this, my instincts told me that there was no sense telling you about something so unobtainable; I assumed the beer was going to be so popular that it would be impossible to get.

A couple weeks later, I talked to Mark Hood, one of the creative masterminds behind Sound Brewery, and learned that I was right. He, of all people, should have known how people would react to a series Mortal Kombat beers, but even Mark was amazed.

So how do you get it? You can fly to Southern California or you can keep an eye on the Sound Brewery Facebook page and see if they do any more special releases. If any of it has made it out to local bottle shops, I leave you to your own devices. Just be safe out there; wear closed-toe shoes.

“This is an ideal opportunity to launch the Mortal Kombat X series of beers, during an event that appeals to our target market” said Jim O’Leary President of Global Beverage Traders.

Sound Brewery and Global Beverage Traders will have all three beers available by August 1 throughout southern California. The beer will be in a number of national chain and grocery stores, beer and wine outlets in addition to on premise locations. Our sales management team has established a national distribution network of wholesale beer distributors and regional and national chains as well as specialty accounts across the US who will carry the Mortal Kombat X v1 Series of Beers.

This new series of beers inspired by Mortal Kombat X is a limited release and available for shipping in 22oz single-serve bottles (12/22 oz case).