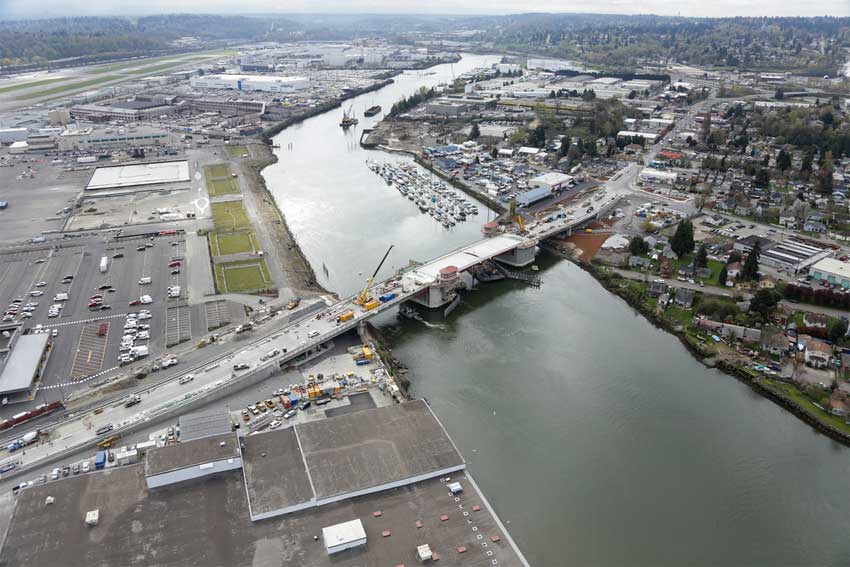 Updated June 27th – This Sunday is a good time to head to South Park and enjoy some local beer. The celebration in South Park this Sunday will include a street party and Lucha Libre, Mexican-style wrestling. Along with that, a beer garden set up a Napoli Pizza will feature beer from at least two of the neighborhood’s four breweries: Odin Brewing and Lowercase Brewing. Nearby, Tin Dog Brewing will celebrate at its brewery and tasting room. No word about any special plans at Burdick Brewery, though it should be open as usual.

Updated June 10th – See the comments section below for up to date information about the outcome.

Seattle’s South Park neighborhood is now home to four breweries. For the past four years, the neighborhood rested in relative isolation, but that’s about to change. King County recently announced that on June 30 the new South Park Bridge opens to traffic, connecting the community to East Marginal Way and Georgetown. South Park plans to celebrate the opening of the new bridge on Sunday, June 29.

Although it was not impossible with the bridge over the Duwamish River closed, visiting any of South Park’s breweries or other businesses required a lot of faith in your phone’s navigation app. Businesses struggled to survive. Some did not make it. But where there is beer there is hope, and during the closure three new breweries opened in South Park: Burdick Brewing, Lowercase Brewing, and Tin Dog Brewing. Odin Brewing opened in South Park back in 2010, prior to the demise of the old bridge.

For South Park, the bridge opening is a big deal. Not just for the businesses, but also for the residents. The local neighborhood association and local merchants are rapidly putting together some sort of big celebration on the streets of “downtown” South Park.

It would be fitting if the celebration involved a beer garden featuring beers from South Park’s four breweries, but if such a dream is to be realized someone with political influence is going to need to step up and take the reins. I‘m looking at you, Dow Constantine. After all, Dow, this bridge is your baby.

Yesterday Kim and I spent the afternoon visiting brewery taprooms in South Park. The mission, find out about each brewery’s plans for the celebration. We hoped to learn about some grand plan that included all of the breweries. What we learned is that all of the breweries want to do something to celebrate the big day, either collectively or independently. We also learned that plans are still coming together. But that aint all.

The announcement of the bridge opening came suddenly; therefore, everything is coming together quickly and a bit chaotically. The plan was literally coming together around us yesterday afternoon. We went from one brewery to the next, sharing what we’d learned at the last, listening to ideas at one place, hearing them shot down at the next.

At our first stop, we talked to a disappointed Lisa Rough, proprietor at Tin Dog Brewing. She’d hoped to put together a beer garden for the event and feature beers from the neighborhood’s breweries. Regulations being what they are, the state does not allow a brewery to run a beer garden. Some other organization, a bona fide not-for-profit organization, would have to step up and do it.

Whatever the organization, it would need to get a Special Occasion License from the state, the application for which must be submitted 45 days prior to the event. Then there are City of Seattle regulations and permits. For the sake of conversation, let’s assume the application and everything else could be fast-tracked. The party is now just 21 days away.

Even if that all could happen in such a short timeframe, Lisa feared that without the breweries’ direct involvement, the not-for-profit organization would take the easy way out and simply let a big distributor operate the beer garden. In other words, a Coors Light beer garden.

Lisa told us that, one way or another, Tin Dog would do something special for the big day – maybe a barbecue in the parking lot. We promised to help promote whatever they decided to do.

Our next stop was Lowercase Brewing, where the beer garden was busy with people enjoying the weather and the beer. Chris Smith, founder and brewer at Lowercase, was busily brewing a batch of beer but told us that they too planned to do something in lieu of the beer garden, though he still seemed hopeful about that plan. One of Chris’ ideas involved a party bus that would continually move people between South Park’s breweries.

Around the corner at Burdick Brewing, we talked to Max Leinbach (founder, brewer). He seemed to have a laid-back approach. He’s waiting to see what becomes of the whole thing but plans to participate however possible.

One of our fellow patrons at Burdick Brewing, who happened to work with the neighborhood association, suggested that there was talk of a licensed establishment (one of South Park’s restaurants or bars) putting together a beer garden. Well, at least he suggested it was a possibility.

As we prepared to leave Burdick Brewing, Chris came over from next-door (Lowercase Brewing) to discuss the situation with Max. I’m not going to disclose everything we learned from that conversation except to say that the situation is still in flux. The dream of a “South Park only beer garden” is still alive, but they need help.