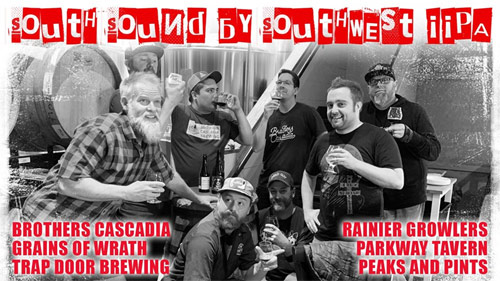 “On behalf of the Pierce County craft beer scene, myself included, I’d like to apologize for just how obnoxious Friday, May 10 will be during SSXSW,” says Ben Chase, manager at Rainier Growlers on South Hill, in Puyallup. “Extra apologies for any and all usage of the term ‘killing it,’ gratuitous name-dropping (‘Oh, hey, [insert celebrity here]’), photos of long lines waiting for the official roving SSXSW Van, and whining about how tired we are. That said, our collaboration double IPA will rock, and it deserves the extra attention.”

Continuing the theme of three, South Sound by Southwest IIPA was brewed using three hop varieties: Amarillo, Strata and El Dorado, including some Amarillo Cryo hops. It is hazy thanks to the use of some flaked oats and wheat.

Beginning at 5:00 on Friday, May 10, Rainier Growlers, Parkway Tavern and Peaks and Pints will tap South Sound by Southwest IIPA, as well as different beers from the three collaborating breweries. The SSXSW van will circulate between the three craft beer bars from 6:00-10:00.

“South Sound by Southwest isn’t a beer festival, a music festival or a fashion festival — it’s a big bundle of everything rolled into one spring, Pierce County night,” adds Chase. “You’ll drink delicious beer that you’re unlikely to see in your own backyard, find something thrilling, meet some cool people, listen to some rocking recorded music, and perhaps even plan a day touring Southwest Washington breweries. SSXSW has an array of options available that are sure to knock your glasses off.”

The South Sound by Southwest folks suggest beginning at 5 p.m. inside Rainier Growlers, but you are welcome to find your own way.