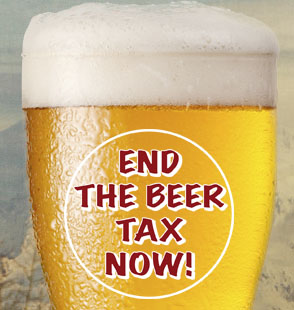 See all our posts on this topic.

I just found this on the news wire. It’s a press release, dated April 10, 2013, from the End the Beer Tax Now Coalition.

Understand that the Washington Brewers Guild, with which this blog firmly stands in alliance, is not at all the same as the End the Beer Tax Now Coalition. To the best of my understanding, the Bellevue-based End the Beer Tax Now Coalition either directly or indirectly represents the interests of what we have been referring to as “big beer.” Understandably, the Coalition is against this tax. Period.

The Coalition believes the tax should sunset at the end of June as they (and all Washingtonians) were originally promised when the tax was enacted. Expanding the tax by eliminating the 60k exemption for smaller breweries is not really the meat of the matter for the Coalition, which wants to see the tax go away entirely. I can’t blame them.

I hope that accurately summarizes their position.

I admit that I am not operating with true journalistic objectivity on this issue. My heart lies with the craft breweries. I wear that on my sleeve. Still, I think it is important for me to share this.

SEATTLE, April 10, 2013 /PRNewswire-USNewswire/ –The End the Beer Tax NowCoalition today issued the following statement in response to Washington state house Democrats’ proposal to extend and expand the increase in the temporary tax on beer:

“It is disappointing that House Democrats have chosen to single out Washington’s beer producers by punishing brewers of all sizes with a crippling tax on their product.

“When the tax increase was enacted in 2010, lawmakers gave us their word that it would be temporary and they shouldn’t go back on their promises to Washingtonians.

“Additionally, applying the tax based on barrel production unfairly penalizes any brewer who wants to expand, create jobs and invest in their business and their community.

“The End the Beer Tax Now Coalition believes the beer tax should sunset so brewers of all sizes can grow, compete and help Washington’s economy flourish.”