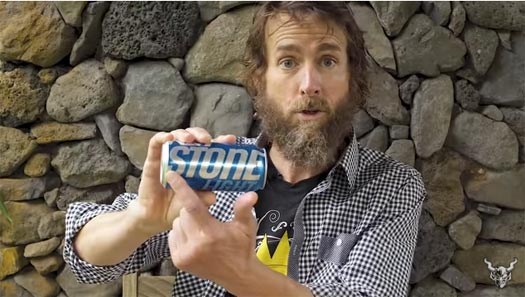 The Schlitz hit the fan yesterday when Stone Brewing announced that it had filed a lawsuit against beer behemoth MillerCoors. At the heart of the matter, the recent rebranding of Keystone Light that makes conspicuous use of the word Stone.

According to Stone Brewing, it’s no accident that MillerCoors is now focusing on the word stone. “MillerCoors tried to register our name years ago and was rejected,” said Dominic Engels, Stone Brewing CEO. “Now its marketing team is making 30-pack boxes stacked high with nothing but the word ‘STONE’ visible. Same for Keystone’s social media, which almost uniformly has dropped the ‘Key.’ We will not stand for this kind of overtly and aggressively deceptive advertising. Frankly, MillerCoors should be ashamed.”

Greg Koch, the vociferous co-founder of Stone Brewing, spoke out about the lawsuit in a couple of ways. First, with a statement in a press release. Second, with a video on YouTube. (See video below.)

“Stone, known for being the antithesis to ‘Big Beer,’ has long waved a flag of bold character, individualism and independence,” said Greg Koch in a press release. “The craft beer pioneer feels that it has no choice but to combat MillerCoors’ aggressive marketing moves, which abandon Keystone’s own heritage by falsely associating with the one true STONE.”

In the video Koch points out that MillerCoors uses the word stone flagrantly when advertising Keystone. “Grab life by the stones, stones this, stones that.” Continuing, he says, “In the world of beer, the word stone is ours.”

“They know they can’t buy Stone, but they can obfuscate,” says Koch. “They can co-opt our brand and our good name, or at least they can try.”

MillerCoors was quick to reply. “This lawsuit is a clever publicity stunt with a multi-camera, tightly-scripted video featuring Stone’s founder Greg Koch,” said Marty Maloney, MillerCoors media relations manager. “Since Keystone’s debut in 1989, prior to the founding of Stone Brewing in 1996, our consumers have commonly used ‘Stone’ to refer to the Keystone brand and we will let the facts speak for themselves in the legal process.”

While Koch shares a lot of personal feelings in his video, this is a legal matter and the courts will determine the outcome. To those of us who side with Stone Brewing, it seems cut and dry, but rest assured that MillerCoors has a stable full of fast-talking, three-named lawyers saddling up for a long ride.

“Big Beer is once again playing dirty in their battle against independent beer,” Koch tweeted on Monday. “We didn’t start this fight, but no way in hell are we going to back down from it.”

I should point out that every devil has its advocate. At least one person of some notoriety in the beer world was not entirely pleased with Koch’s approach. That person, who I will not name because that’s probably what he wants me to do, accused Koch and Stone Brewing of treating this lawsuit like an advertising campaign.

Yes, I recognized that too. In the video, Koch makes it clear that this is not a publicity stunt. I’m sure it’s not. Then again, that video got over 60,000 views the day it was released. And here I am talking about Stone Brewing on the Washington Beer Blog. So, even if it wasn’t a publicity stunt, it was a damn good one.

If you had a legal dispute with your neighbor over a fence line, would you announce the lawsuit to the world by putting a 30-foot tall, blow-up gorilla on your roof holding a sign that says “My Neighbor Sucks!“? Wouldn’t that seem petty? Wouldn’t that trivialize the matter? Wouldn’t that seem like you’re relying on the court of pubic opinion?

Yes, I get that point, Mr. Devil’s Advocate, but who’s side are you on?

As for me, I would have handled things exactly the way Stone Brewing did yesterday.

MillerCoors has very, very deep pockets and their budget to fight this lawsuit is probably unlimited. If money can influence the outcome of a legal matter like this, Stone Brewing has no hope of winning. But MillerCoors cannot buy Stone Brewing and they cannot buy public perception.

So hell yes I’d put that big-ass gorilla up on the roof. Kick ’em where it hurts. Right in the stones.