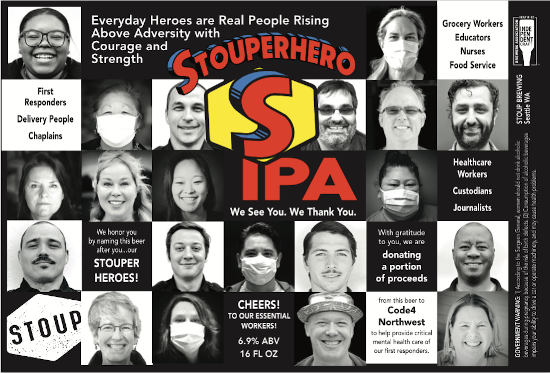 The first beer in the Stouperheroes series benefits Code 4 Northwest

Stoup Brewing releases Stouperhero IPA today, June 3rd. The freshly canned beer was brewed to honor the heroes that walk among us every day in this pandemic-impacted world: first responders, nurses, grocery workers, delivery drivers, and so on.

The Stouperhero series of beers will each benefit a cause that supports these important but often-underappreciated heroes. Stoup will donate proceeds from the sale of the first beer in the series to Code 4 Northwest, a local organization that provides critical mental health care to our first responders.

Stoup Brewing only recently began canning its beers, a long-standing plan accelerated by the pandemic-related shutdowns. They rushed to get those first canned beers out the door, but the Stouperhero series is an idea the brewery kicked around for some time.

“Before we had put beer in a can for the first time, we were thinking about how cans could help us give back to the community that supports us,” says Lara Zahaba, co-founder of Stoup Brewing. “So as we were deciding how to roll out canned beer, we were also thinking about a specific Stouperhero series that would highlight the everyday heroes we see around us while supporting organizations that do the kind of work we value at Stoup Brewing. So we partnered with a local nurse and artist, Mary Larson, to begin a series of painted portraits that would become Stouperhero labels.” 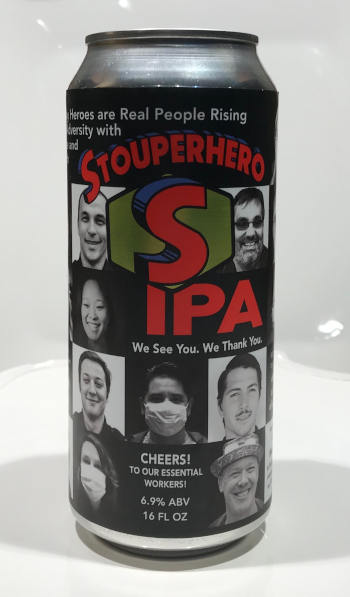 “Enter COVID-19 and a shutdown that pushed a lot of plans to the side while we figured out how to navigate new waters,” says Lara. “Those cans turned out to be a lifeline for us too, and we started putting beer into them as fast as we could. And while we figured it out, the heroes have been out there working hard for all of us every day.”

Mary Larson, the artist/nurse mentioned above, began photographing these kinds of heroes doing their work and translating the photos into painted portraits and artwork for the Stouperhero IPA series.

Lara explains, “To honor the heroes on the label we are donating a portion of proceeds to Code 4 Northwest. We know this pandemic is taking a toll on the people working the front lines every day. We need them to receive care too!”

This first Stouperhero IPA features Citra and Strata hops. Starting today, June 3rd, it is available in 4-packs of 16-oz cans, to go, at the brewery in Ballard. Stoup Brewing will donate $2 per 4-pack.