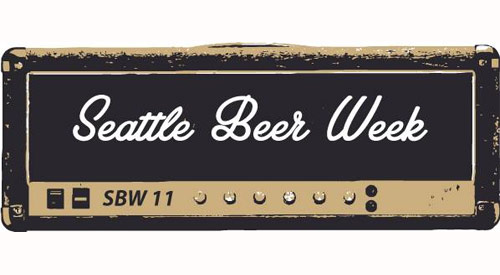 Seattle Beer Week 2019 kicks off on Thursday, May 9th and runs through May 19th. Seriously, there are way too many cool beer events for me to list here, so you should check out the official SBW website and peruse the events calendar. Below, I offer some suggestions, based on nothing but my own opinion. I don’t necessarily intend for you to use this as a guide; rather, consider it an example of the kinds of events happening during Seattle Beer Week.

Get out there and do something!

Thursday, May 9th
(see all events for this day)

6:00 P.M. – Seattle Cask-O-Rama at Beveridge Place Pub. A dozen Seattle-brewed beers poured from firkins lined up on the bartop. The Seattle Beer Week bus will be stopping here at 6:30, with a crew of beer industry familiar faces. (Cask-O-Rama continues the following day, until the beer is gone.)

5:00 P.M. – Aslan Takeover at Ounces in West Seattle is tapping into the official Seattle Beer Week beer and will also pour a bunch of other beers from Aslan Brewing. The SBW bus stops by here at 8:30.

Friday, May 10th
(see all events for this day)

All Day (and through the weekend) – Stoutfest at Brouwer’s Cafe. Bid one final farewell to the season of dark beer. Stout, stouts, and more stouts on tap all weekend.

Saturday, May 11th
(see all events for this day)

There’s a lot going on today. Be sure to check out the all events link above.

All Day – Brewshed Alliance Tap Takeover at Watershed Pub. A bunch of beers that support this worthy cause.

All Day – Sour Power at The Beer Junction. An amazing lineup of sour beers, including five from The Rare Barrel, a barrel-specialty brewery in Berkeley, CA.

3:00 P.M. – Bob’s Brown Ale Release. Seattle’s most philanthropic brew, release at this time every year by Georgetown Brewing. This is the official release party.

Sunday, May 12th
(see all events for this day)

It’s Mother’s Day, but if you must, use the link above to see what events are happening.

Monday, May 13th
(see all events for this day)

All Day – THIS IS WASHINGTON, DAMN IT! The Beveridge Place Pub will offer a huge selection of Washington-brewed beers on tap for just $4. Also, you can order a pizza from Zeeks Pizza for just $15. Any pizza, any size. Cheap date night!

5:00 – 9:00 – Women in Beer at Pike Brewing. Enjoy beers brewed by women, along with all sorts of other things created by women: booze, wine, cider, food. This is a ticketed event.

Wednesday, May 15th
(see all events for this day)

6:30 – 11:00 – SBW Reunion Tour at Pine Box. Each year someone brews a special Seattle Beer Week beer. All of the breweries from the past will be here for this one, and they’re bringing beer. Beer and games, with a high school reunion theme.

7:00 – Vancouver Brewers Takeover at Latona Pub. “A few years ago, we traveled south to Vancouver, WA and found an incredible brew scene. Years later, that scene has continued to grow and prosper, so we’ll be hosting some of the best breweries from the region. Featured breweries include Grains of Wrath, Fortside, Brothers Cascadia, and Trap Door—all of whom will be bringing some of their freshest brews out for the night.

Thursday, May 16th
(see all events for this day)

All Day – Sour Fest at Brouwer’s Cafe. Last weekend was about stouts, this weekend is about sours. They’ll feature a large and impressive selection of sour beers for your pleasure.

5:00 – 9:00 – Fremont Fest at Growler Guys. They’ll offer a bunch of beers from Fremont Brewing on tap. The list includes… wait for it… Brew 3000. It sold out fast, but you can taste it here while supplies last.

Friday, May 17th
(see all events for this day)

All Day – Bodacious Beverages at the Beveridge Place – This is always a good one. They source some killer, big beers and drag some special stuff out of the cellar.

All Day – Nitro Fest at Teku Tavern. Like nitro beers, well here you go. It might be the largest selection of nitro beers ever assembled. I haven’t heard of more. All 50 taps!

7:00 – 10:00 – Brewers Symposium at Reubens Brews. Hosted by yours truly, this panel discussion will be pretty geeky, but we will try to keep it interesting for beer drinkers and not just beer brewers.

Saturday, May 18th
(see all events for this day)

All Day – Reuben’s Invitational. Nineteen breweries from around the region and around the world will converge on Reuben’s Brews for this event. The list always involves some heavy hitters from out of state. Live music, lots of beer, lots of fun.

Sunday, May 19th
(see all events for this day)

1:00 – 3:00 – All Mutts Great and Small Fundraiser. Brewmaster’s Taproom in Renton hosts a BBQ party to benefit this worthy dog rescue organization out of Yakima. Featuring beers from Varietal Beer Company of Sunnyside, WA. For $20 you get a killer BBQ meal plus a pint of beer. Adoptable dogs will be on site. Learn more and get tickets here.

REMEMBER, there are a lot more events going on. These are just the ones that immediately appealed to me. Check out the complete events calendar for all the events. Get out there and do something!