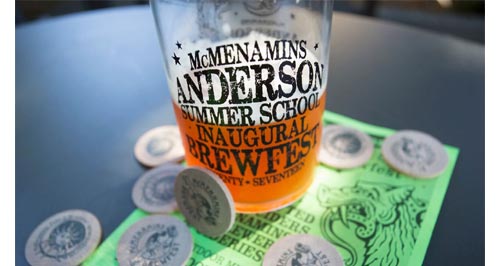 Growing up, summer school was a threat made by my parents. It was a promise to destroy my summer vacation if I didn’t do better during the regular school year. Now, Summer School has a new meaning. It is a beer festival at McMenamins Anderson School in Bothell. This year’s event is slated for Saturday, July 27th from noon until 10:00 PM and features beer tastings from Anderson School’s own brewery as well as a collection of other local breweries (see below). Also, live music and brewery tours.

It’s free to attend the event, tour the brewery, and enjoy the entertainment. If you want in on the beer fest part of the curriculum, then you’ll need a ticket.

In the past, the event has included beers from more than 20 local breweries. We share the list of this year’s participants below.

All ages welcome; 21+ to sample

Tickets available at the door, but this year you can buy your tickets online.

Time to get tickets for Winter Beer Festival
The 7th Annual Washington Hop Mob is shaping up nicely
Win tickets to Belgian Fest, happening at Seattle Center on Jan. 25th