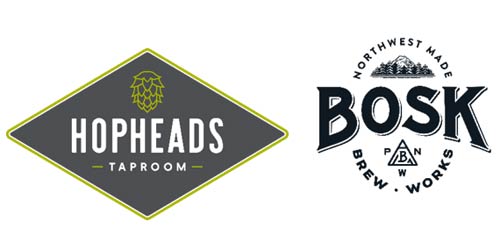 On Saturday, July 20 Hopheads Taproom in Woodinville hosts an event to launch a special beer brewed by Bosk Brew Works. The beer was brewed in collaboration with the crew from Hopheads Taproom. Proceeds from the sale of HOPE-HEADS IPA will benefit Hopelink. The event on July 20th runs from 3:00-6:00.

Beyond the launch party, find HOPE-HEADS IPA at Bosk Brew Works and Hopheads Taproom in Woodinville, as well as select craft beer bars across the Eastside and around the Puget Sound area, from July 20 thru November 30, 2019.  For every pint sold during the 130-day timeframe, $1 will be donated to Hopelink.

The beer and the event provides a great opportunity to introduce Hopheads Taproom as a new sponsor of the Washington Beer Blog. The beer-focused, kid- and dog-friendly taproom in Woodinville opened last year. In addition to 24 taps pouring beer, wine and cider, Hopheads Taproom serves house-made sandwiches, calzones, warm pretzels, and ice cream.

“We’ve wanted to share our love of craft beer on the Eastside for several years and when we found the Woodinville location, we jumped on it,” says Jay Farias of Hop Heads Taproom. “Our goal is to pour the greatest craft beer, cider and wine from Washington State first and then reach out to the rest of the world for their amazing offerings. Our draft beer line-up is a nice mix of a few recognizable beers for the newer craft beer drinker and then several “what’s new” beers for the craft beer veterans. Every handle rotates.”

About Hopelink
Hopelink is a non-profit organization working to help end poverty in our community. Hopelink works with clients through various programs that can increase their income, improve their employment potential, maintain stable housing, and when appropriate, advance their education.  Visit https://www.hopelink.org/