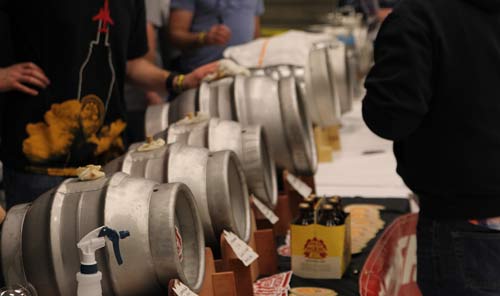 The 20th Annual Washington Cask Beer Festival takes place this Saturday in Seattle. It is one of the area’s longest-running beer festivals. Today we share a story written for us by Bob Brenlin, the owner of three venerable beer-focused bars in Seattle: Latona Pub, Hopvine Pub, and Fiddler’s Inn. The first of the three, “the Latona,” opened in 1987, when finding good beer was no easy task. Bob was dedicated to the pursuit of hand-crafted, local beer and managed to focus on pouring it at a time when there were only 150 breweries in the entire nation. So who better to talk about the tradition of cask-conditioned beer and the tradition of Washington Cask Beer Festival. (See our previous post for more info and list of participating breweries.)

Twenty years of Cask. Preserving a tradition
by Bob Brenlin

Most people don’t walk into a craft beer around here and say, Hey I will have a cask. Though some folks know what it is, it is not the latest and greatest thing on the beer hit chart. The muddy mess of hazy, or a frantic sour, or sexy pilsner are more sought after than the comforting and warmish cask. There was a cask craze around here encouraged by the likes of Bert Grant and Mike Hale, early proponents of “real ale”, but more recently cask-conditioned beer is relegated to festivals or crazy beer aficionados, like Gary Sink at Beveridge Place Pub, which still hosts a monumental cask beer festival every year (Cask-O-Rama). Look, there is a cute little keg on the bar. I wonder what that is?

The Latona Pub had the first cask festival more than 20 years ago when the novelty of cask was something that created a buzz. It moved to Hale’s Ale Brewery later, then on to Seattle Center, and this week a milestone is being made this year as the Washington Brewer’s Guild celebrates the 20-year tradition of a cask beer festival.

Now known as Washington Cask Beer Festival, and held at Seattle Center this Saturday, the event is one the oldest local beer fests and celebrates the tradition of beer served by traditional means as was done before refrigeration and standardized kegging became the norm. In the early days of beermaking, especially in the warmer climates such as England, beer was brewed and allowed to ferment in wood vessels and then served in that same vessel at cellar temperature. The process of fermentation in the keg created natural carbonation and a resulting flavor profile. Since there was no refrigeration readily available there was no other option but to let the yeasty beasties work at a warmer temperature. The yeast evolved to this, and there is a signature flavor profile because of it. In contrast, in cold climate brewing areas like Germany, cold temperatures and iceboxes slowed yeast down but also created a completely different beer experience. Lager, the beer we think of, comes from the process of “lagering” or cold temperature fermentation.

Beer is old as dirt and brewing beer is as simple as rain-soaking grain and harvesting the liquid. But today everything is about moving through life as quickly as possible. The industrialization of beermaking was a key to replicating pint after pint after pint. The keg itself changed. Today the vast majority of breweries use what is called a “straight sided bungless Sankey.” They are top-filled kegs that moved along on a conveyor belt and the cleaning, rinsing and filling process is automated. The cleaning, rinsing, filling and serving all happen through one fitting at the top of the keg.

The idea that beer is served at cellar temperature and that a bung (big cork on the side of the keg) is applied to a keg that is hand-filled is certainly quaint and is a thing of the past. An organization called CAMRA (the Campaign for Real Ale) was established in England back in the 1970’s to make sure the tradition was carried on in merry old England. With nearly 200,000 members, it is one of the largest independent, voluntary consumer organizations in the world.

Cask-conditioned beer is beer that undergoes secondary fermentation in the vessel in which it is served. As defined by CAMRA, “real ale finishes fermenting, conditioning and maturing in the container from which it is dispensed.” Interestingly, the cask fest is more about the vessel of beer rather than the beer itself. We are quickly approaching a bungless society. The bunghole will be gone as no brewer in their right mind wants to pound a bung on every keg. The only thing worse than pounding the bung in is taking it back out when the keg is empty. The resurgence of wood-aging beer is the only thing saving the bung. That and an anachronistic cask beer fest.

But the flavor of cask beer is worth the effort. If done right, it is one of the freshest beer experiences available. If done wrong, it is flat and lifeless. Everything has a modern Northwest twist, and so does how we do cask-conditioned beer. We are not CAMRA approved; we are the colonies and we do things a bit differently. We have no concept of cellarmanship and making a cask-conditioned beer (and kegging it) is painful for the brewer. A specific keg is designated and then, before fermentation is complete, the beer is racked off into a firkin, a pin, or some old, discarded Golden Gate quarter barrel keg. Sugar, or some active wort, is added to create a secondary fermentation. “Regular” beer is force-carbonated, which means Co2 gas is forced, or diffused, into the beer.

The keg then needs to find a quiet place where the natural carbonation can take place. (Co2 is a byproduct of fermentation.) At some point, the keg should be vented to release the excess Co2. Then the keg (cask) is carefully transferred to a place for very careful pouring. Of course, we don’t have time for any of that; Cask Fest is a rush to pour and the typical venting and resting processes don’t take place. 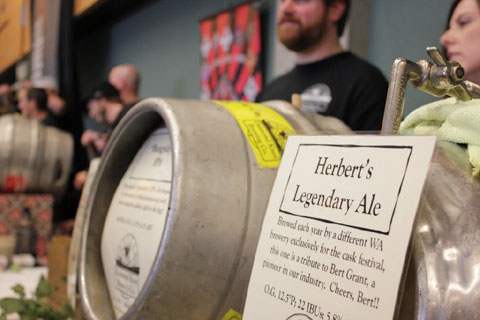 The bunghole, that big cork in the side of the keg, also provides a place for dry-hopping individual kegs and that is where some exciting beer flavors can happen. Of course, one of our knowledgeable cask brewers thinks the bunghole has provided a means to make it “Strange brew fest.” Jalapeno IPA is not what CAMRA had in mind; However, dry hopping individual kegs is an exciting means to create a totally different beer experience. That is the excitement of cask and why brewers need to keep the tradition alive. The creativity of the event will always outweigh the cumbersome nature of making cask. The flavors will always be different than beer that is force-carbonated. There is a softness that you will never get from a beer on tap.

The tradition of cask should be passed on to future brewers, for not only does it maintain a tradition it maintains a beer style that is strikingly different because of the process used to create it. The Washington Cask Beer Festival is an experience that cannot be replicated. The beers served will be unlike anything typically served at your local pub. It is exciting to find so many casks in one place. Cask-conditioned beers will go the way of the dodo bird unless festivals and foolhardy retailers demand them. Support the tradition and support real ale.