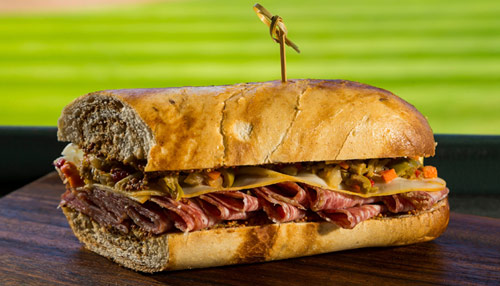 It’s going to take a while for me to stop calling it Safeco Field. Old habits die hard. Centerplate, the company that handles the food and beverages program at T-Mobile Park (formerly Safeco Field) recently introduced this year’s food and beverage lineup. Some of the most popular features of the beer program are returning this year: lots of great beers in cans, cask-conditioned beers at every game, barrel-aged beers, and so on.

Yes, this is a beer blog. The Washington Beer Blog’s annual Beer at the Ballpark report is always very popular and very useful, and we will once again provide you with all the beautiful ballpark beer info before opening day, but first I’d like to introduce you to some of the items on the new food lineup. After all, that ballpark beer has to wash down something, right?

Centerplate is committed to providing baseball fans with an authentic Seattle food experience at the ballpark, stuff that rises above what people typically expect at such a venue. “We like to think that our offering at Mariners games is like operating a hyperlocal restaurant for thousands of fans at once,” said Steve Dominguez, Centerplate Regional Vice President. “Our fans and guests are looking for menu items that authentically represent the community around them, and there is no better way to do this than working with our incredible local partners to provide a best-in-class experience.”

I recently attended a preview of this year’s food lineup. Here are my favorite food items, which represent just part of the overall offerings.

Burgers – Not crappy burgers wrapped in foil and dried out under heat lamps, but seriously good burgers like you’d get at one of Seattle’s finer restaurants or burger joints. You have two options: The “Ethan Stowell Chef-Inspired Burger” at the Hit it Here Cafe and the “Big Woody Burger” from Li’l Woody’s in The Pen.

The Ethan Stowell burger is rich and delish, with Hempler’s bacon, Beecher’s dulcet cheese, grilled onions, and chili aioli: it’s a honkin’ big burger with a ton of flavor.

The Big Woody burger is more like the burger you’d make in your backyard, assuming you’re a chef and not just a weekend warrior. It is juicy and served up fairly simply with bacon, cheddar, lettuce, onion, pickles, and tomato. They are both very good burgers: I liked the Ethan Stowell Burger and my burger-connoisseur wife preferred the Big Woody Burger.

Pork and Corn – Paseo, which operates its Caribbean-inspired, sandwich-focused restaurant a couple blocks down the street from the ballpark, is now in the ballpark serving up two more of my favorite items: Caribbean Pork Sandwich and Corn on the Cob. Paseo’s passion for building great sandwiches is well-documented so I won’t go into details, but the corn deserves some explanation because corn on the cob generally doesn’t sound very sexy. Roasted corn (think Mexican street corn) smothered in garlic aioli, parmesan cheese, cilantro, and spices. You can even get a bucket of corn which includes several ears in a cardboard bucket! Available at Edgar’s Cantina and Edgar’s Homerun Porch.

Grand Salami Sandwich – Available at Sultan of Swing Sandwich (section 105). A lot of salami and smoked provolone served with grainy mustard on a marbled rye baguette. It is simple, delicious, and filling. “Get out the mustard and the rye bread, Grandma. it’s Grand Salami time!” 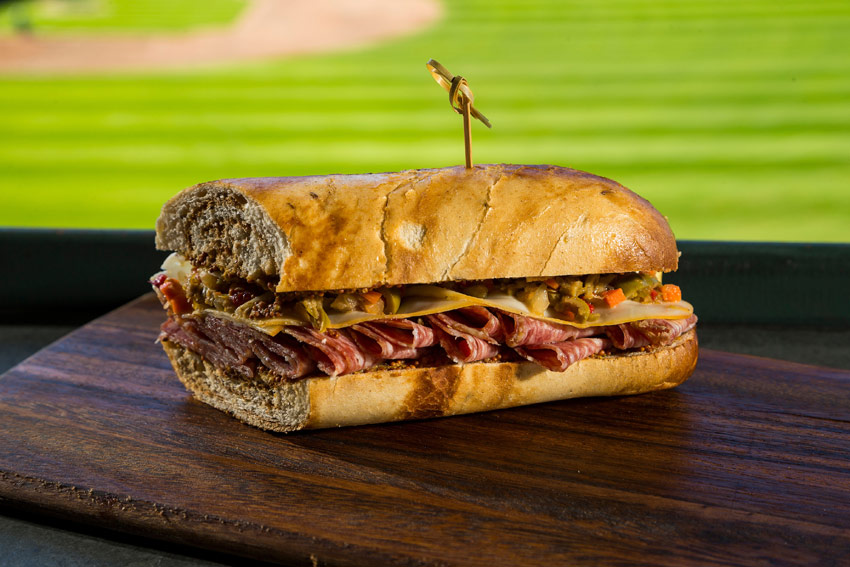 Fried Chicken Breast Sandwich – Fat’s Chicken and Waffles, located in Seattle’s Central District, brings its amazing fried chicken to the show this year in the form of a mouth-watering sandwich (pictured near the top of the article). Served on a toasted bun with garlic aioli, pimento cheese, tomato, pickle, and greens. Crisp, tender, moist and perfectly seasoned.

We will have our ballpark beer report ready for you soon! Stay tuned.