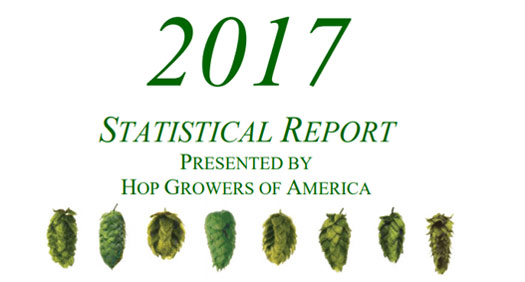 Each year the Hop Growers of America (HGA) compiles a statistical analysis of the world hop crop. The annual Statistical Report includes detailed information about the previous year’s harvest. Along with the a lot of granular details, the HGA also shares some broader insights. What will probably be of the most interest to many beer connoisseurs is the breakdown of hop varieties that were grown in 2017, which we share below.

There have been some reports in the news recently about a hop surplus and how it is impacting the hop growing industry. This is different. The Statistical Report is about what is being grown, not what is being sold, though there is obviously a relationship. This report focuses on the agricultural aspects of the industry. The often uncomfortable, but necessary, dance between growers and brewers (hop contracting) is a subject for a different day.

Washington Still the Leader, but…

Last year, the Pacific Northwest (Washington, Oregon, Idaho) grew about 99 percent of the U.S. hop crop. Washington led the way, producing 75.4 percent of the crop, primarily in the Yakima Valley. For the first time, in 2017 Idaho overtook Oregon as the second largest producer. Idaho produced 13.2 percent  of the Northwest hop crop while Oregon produced 11.4 percent.

Once again, demand for aroma hops grew last year, although the growth rate slowed from the previous year. To understand the report, you should know that hops are generally divided into two categories: aroma hops, which are primarily used for their aroma/flavor properties, and alpha hops, which are primarily used for their bittering properties. Some aromatic varieties are referred to as dual purpose hops because, in varying degrees, they also posses significant levels of the alpha acids that create bitterness. Alpha hops are often referred to as bittering hops.

For the most part, the kind of hops that modern IPA lovers know by name (Simcoe, Centennial, Citra, Mosaic, and so on) are considered aroma/dual purpose varieties.

Over the past five years, there has been a substantial move from alpha hops to aroma hops. Since 2012, U.S. hop acreage has increased 79.5 percent. During that same period, the variety balance has shifted from 50/50 to 80/20 in aroma hops’ favor. That is, last year 80 percent of the hops grown in the U.S. were aroma/dual purpose varieties.

Below, I list the top 10 hop varieties grown in the U.S. in 2017. Also, their classification (according to YCH Hops). As you can see, seven of the ten are classified as aroma/dual purpose hops.

“While global hop demand appears to be on the rise thanks to burgeoning international craft beer cultures, many industry leaders cautioned against additional acreage being added in the U.S. for the 2018 crop,” says the HGA. “All key indicators suggest current aroma hop demand has largely been satisfied by the unprecedented expansion of U.S. acreage in recent years.”

In other words, the HGA does not expect growers to continue increasing aroma hop acreage. They don’t see a need.

The HGA points out, “Many reports indicate current global alpha inventories are insufficient for market demands as the global brewing industry has finally worked through decade-long surpluses (of alpha  hops), which had perpetually depressed the alpha market since 2009. However, the alpha deficit is expected to be satisfied in the near term with the impending transition of certain excess aroma acres back to alpha in the U.S. as well as the recent additions of significant alpha acreage in Germany of the Herkules variety.”

Here is the complete report, in PDF format, for those of you who want to dig into the nitty gritty.

Coffee Beer Fest at Beer Junction this weekend
Anderson Valley Brewing changing ownership, remaining independent
Is Seattle one of the best beer cities in America or not?