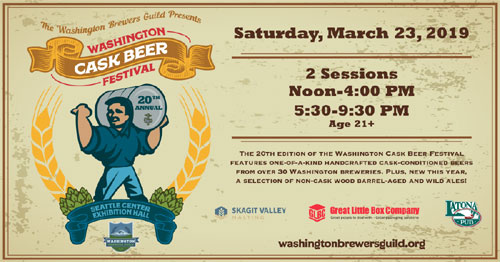 It’s March, and you know what that means. The clocks move an hour forward, the calendar flips over to spring, and Washington beer lovers celebrate cask-conditioned beer. The Washington Brewers Guild presents the 20th Annual Cask Fest on Saturday, March 23rd at Seattle Center’s Exhibition Hall. Tickets are on sale now for this often sold-out event. There are two sessions: one in the afternoon and one in the evening.

In all, at least 28 Washington breweries will bring cask-conditioned creations to the event. See the list of breweries below. We’ll have the list of beers soon. Like there will be in excess of 60 cask-conditioned beers poured at the event. This year, the participants have been asked to bring barrel-aged beers and/or wild-fermented ales to the festival in addition to the more-expected beer styles.

Once again, the event sees the release (limited release) of Herbert’s Legendary Cask Fest Ale. Brewed once per year, usually as a collaboration between multiple breweries, this Northwest-Style Amber Ale is created to honor Bert Grant, a craft beer pioneer who opened the nation’s first post-Prohibition brewpub in Yakima back in 1981. The 2019 version of Bert’s was brewed at Anacortes Brewing with malt from Skagit Valley Malting and is dry-hopped with Simcoe hops.

This year, Herbert’s Legendary Cask Fest Ale will be the WABL beer, available only to members of Washington Beer Lovers (WABL), the official fan club of Washington beer. If you go to at least one festival per year, your annual membership pays for itself. It only cost $30 to join WABL and that includes a T-shirt, so the other benefits are just gravy. Read more about WABL here.