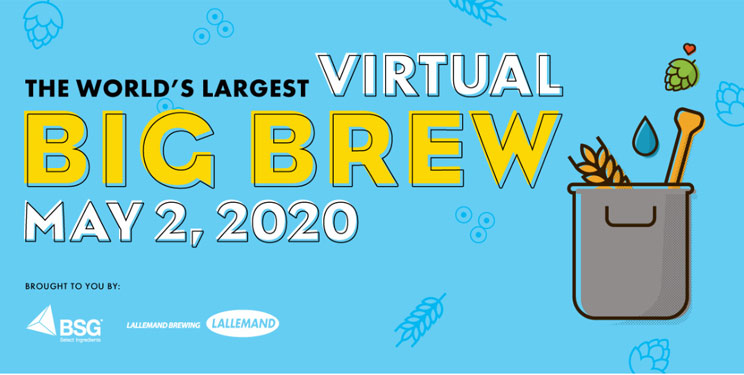 This Saturday is Big Brew. What’s that? To begin with, it is an annual tradition that takes place the first weekend in May and involves homebrewers around the globe agreeing to brew on the same day. Of course, any Saturday sees a lot of homebrewers making beer, but this is a recognized day to show solidarity. Big Brew for National Homebrew Day celebrates the art, the hobby, and the joy of brewing. Historically, it’s also provided a teaching moment, offering an opportunity for newbies to join in the fun and learn about the craft hands-on.

Things are going to be a bit different this year. Instead of groups gathered in parking lots at local homebrew shops, people will brew at home and share the experience virtually, at a safe social distance. There’s always been a virtual aspect to this event. Big Brew has always involved a lot of people brewing at home, and not just in groups at Big Brew events, but this year? Well, you know. This year.

Homebrewers can sign up online, pledging to brew this Saturday. So far over 2,500 people have pledged to brew more than 16,000 gallons of beer. No doubt, a lot more will sign up before Saturday. If you sign up and pledge to brew, you can save $5 on your membership to the American Homebrewers Association. Homebrewers can also access the “official” (suggested) Big Brew recipes on the official website. Those looking to learn about homebrewing should check out the same site.

I don’t often talk about homebrewing here on the Washington Beer Blog. I have my reasons. Mostly, it’s because this is not a homebrew-focused website, but this year Big Brew seems particularly poignant. I know that in the past only a portion of all homebrewers actually participated at Big Brew events, but it was a choice. This year is, well, there’s no choice this year.

The American Homebrewers Association hopes to make this the largest virtual homebrew event in history. So what the hell, if you are a homebrewer, why not sign up and make some beer this Saturday? You ain’t doing nothin’ else.