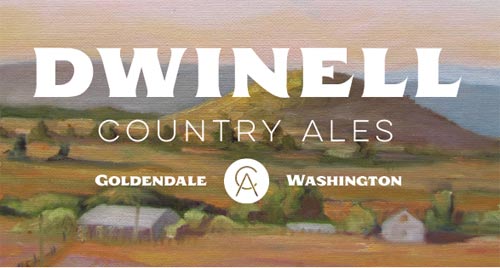 I confess that I have yet to visit Dwinell Country Ales in Goldendale, Washington, but it just might be the best brewery you’ve never heard of. For sure, people that I trust are raving about their beers. When Jeff Alworth names a brewery one of the “three best” anything, I cannot escape the intrigue. It’s a brewery located way out there off the beaten path that focuses on making saison-inspired, mixed-culture beers, delicately hopped rustic ales, and wild ales fermented with native yeast and local fruit.

Dwinell Country Ales just announced that it has introduced a bottle club (Cellar Club) and memberships are available. The brewery focuses largely on farmhouse-style and wild ales. Obviously, barrels are part of the program. Lots of barrels.

Dwinell Country Ales opened in Goldendale in the summer of 2017. Because of the kind of beers they produce, a lot of their product is just now reaching maturity.

For the unaware, Goldendale is located northeast of The Dalles, Oregon. It’s about 30 minutes north of The Dalles and about 60 minutes south of Yakima, along Highway 97. Yes, Dwinell Country Ales has a family friendly taproom where they share their creations with the public. See the current taplist (drooling).

Jeff Alworthy, renowned beer writer from Portland, proclaimed Dwinell Country Ales to be one of the top three small breweries in the country. Now that’s some high praise from a fella who knows a thing or two about beer.

Goldendale, Washington (December 19, 2018) – Recently named one of the “Top Three Small Breweries ” in the country by beer writer Jeff Alworth for “Craft Beer & Brewing” magazine, Dwinell Country Ales has announced the start of their “ Cellar Club .”

Since opening in August 2017, Dwinell Country Ales has set its sights on developing a barrel program and bottling their beers. Working patiently with oak and the seasons, these beers express a deeper and more nuanced version of their approach to creating farmhouse-style and wild ales.

By joining the “Cellar Club,” members will have priority and, for certain smaller batches, exclusive access to purchase these bottles with a club discount. All of the beers made available through the “Cellar Club” are bottle conditioned, predominately in 750 ml bottles, enabling these beers to further mature in one’s cellar.

“Each beer we make is fermented with a constantly evolving mixed-culture of yeast and bacteria and many of our beers undergo a secondary fermentation over ripe local fruit” says brewer and co-owner Justin Leigh. “For longer term projects and aged beers, we work mostly with barrels that we source from nearby wineries in the Columbia River and Yakima Valleys.”

While these barrel-aged “country ales” will comprise the core of the beers made available through the “Cellar Club,” Dwinell Country Ales will also release a variety of blends, younger beers, and collaborations.

Named one of the “ The Six Best Washington Breweries Outside Seattle ” by “The Stranger,” Dwinell Country Ales is quietly becoming a “go-to” destination for beer lovers and those traveling through the Columbia River Gorge. Now with bottles to take home, there is even more reason to visit Goldendale, WA and try their “travel-rewarding ales” (Jeff Alworth).

For more information about the Cellar Club, visit: www.CountryAles.com/shop/cellar-club

During the shutdown, The Republic Bottleshop opens up in Marysville
Roll up to the brewery on a Rad Power Bike
Cider industry veterans launch a new cider venture - Yonder Cider and The Source