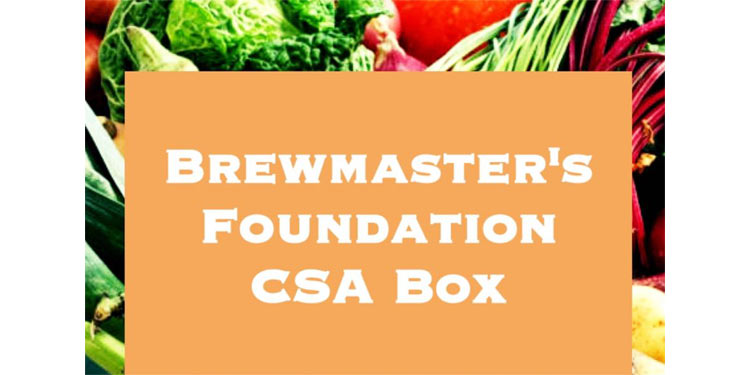 Farm-fresh produce and brewery-fresh beer: CSA boxes from The Brewmaster’s Foundation offer both.

Over the years Marley Rall, the company’s founder, has gained an appreciation for the other producers and growers who sell their products at farmers markets, which are now closed due to the COVID-19 pandemic. For these local growers, the closures are a real hardship. The veggies and other produce continue to grow regardless of the shutdowns. Marley came up with a plan to help.

The Brewmaster’s Foundation, the philanthropic arm of The Brewmaster’s business, will offer CSA boxes starting in April. In addition to the stuff you’d expect to find at the farmers market, like farm-fresh produce, these CSA boxes will also include beer from local breweries.

“The Brewmaster’s Foundation is partnering with local farmers that have lost their revenue stream from Pike Place and other markets being closed down due to COVID-19,” said Marley Rall in a press release. “The best way to do this is by creating a Community Supported Agriculture box (CSA box). These boxes are a great way for community members to invest in a “share” of local farms by signing up for weekly fresh produce that is sourced from local farmers.”

You can sign up for The Brewmaster’s CSA box program at
https://www.thebrewmasterstaproom.com/csa-boxes

Orders for the first week will be due Sunday, April 5th and boxes will be available for pick up on Tuesday, April 7th at The Brewmaster’s Taproom.

“What makes this box so special? We’re highlighting local breweries that have also been decimated by COVID-19,” says Marley. “Each week we will have beer in your box that comes from an awesome local brewery. Before you ask, no, they will not be all IPAs, we will be allowing the breweries to pick what beer they’d like in the box. Just like we allow the farmers to choose what to grow and offer to you, we are allowing the breweries to do the same, so get ready to try some new and different things.”

Why is a foundation associated with the beer industry doing this? It’s simple: “Because it’s the right thing to do,” says Marley.

For more information on The Brewmaster’s Taproom and Foundation, contact Marley Rall, at (808) 753-2063, or email her at [email protected] Also, visit the website at www.TheBrewmastersTaproom.com