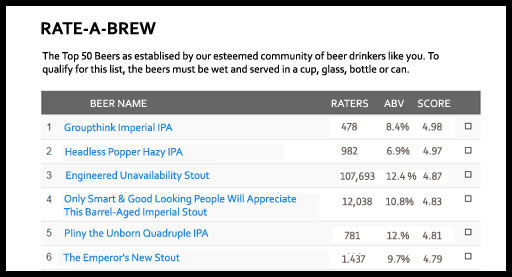 Recently, I got my hands on some data that revealed how Washington-brewed beers rank against beers from other states. What I have, and will share with you in a different post, is an analysis of data harvested from Untappd, the beer rating app that so many of us use to track and rate the beers we drink. (My username is BeerBlog, BTW)

When I got that report, I looked at the numbers and pondered what it really means. I couldn’t help questioning the nature of these kinds of beer ratings. Not because of how Washington’s beer ranked, which was about what I expected, but moreover it spawned a bigger question. I began to wonder about the value of such ratings. Are they useful? Are they harmful? Is this just another first-world beer problem? Probably.

According to Psychology Today magazine, “Groupthink occurs when a group of well-intentioned people make irrational or non-optimal decisions that are spurred by the urge to conform or the discouragement of dissent.”

Hans Christian Anderson published The Emperor’s New Clothes nearly 200 years ago, so the concept of groupthink is not new. The Emperor’s clothes were said to be so fine and so beautiful that they could only be seen by the most intelligent and sophisticated people. Of course, nobody wanted to admit that the Emperor was naked for fear of being dubbed an unworldly idiot.

Has that kind of unhealthy groupthink infiltrated the world of beer?

When you open Untappd, RateBeer, or similar online forums, and search for a beer, you are presented with that beer’s score as determined by the crowd that came before you. How can seeing that score not impact your own judgment? Now, I know that you are not influenced by the opinions of other people, but everyone else is.

If these beer ratings are influenced by something other than the beer itself, what’s the point?

If you encounter a new beer that smells like burnt hair and tastes like unwashed ass, but then you see that it has a 4.5 rating on RateBeer, it would be immensely human of you to adjust your opinion. I mean, not you, but everyone else. Instead of reading your modified opinion, I am much more interested in reading your honest assessment, especially since I have never tasted unwashed ass.

To some extent, everyone except you is vulnerable to this kind of groupthink. I am willing to admit that I have, on plenty of occasions, checked myself and questioned my own opinion after seeing the collective opinion of the group, doubting my own level of taste and wondering if maybe all those people on Untappd are better beer drinkers than I am.

Truthfully, I tend to not check-in to beers that I don’t like, so I am a really bad example. If I really like a beer, I am much more likely to take the phone out of my pocket. I try to remind myself to use Untappd to track all of the beers I drink, without concern for the ratings, but instead, I only check-in to about one of every 20 new beers I drink. In other words, I suck at Untappd.

Here’s what I see as the problem, and this is probably obvious by now, published scores beget similar scores. If the first two people who taste a new beer rate it very high, it would be unusual for the third person to rate it very low. Once again, I am not talking about you; rather, I am talking about everyone else.

How much of an impact groupthink has on the beer’s eventual score, I do not know. Maybe a lot, maybe very little. Maybe you completely disagree with me and think it has no bearing on the final score. Maybe you don’t care and think it’s okay if nobody mentions that the Emperor is naked.

B-Bomb is a Great Beer Regardless of the Groupthink

If Fremont Brewing’s B-Bomb is a great beer, it’s not because the group says it’s a great beer. Sure, the folks who make it are probably happy that it is so highly rated, and maybe those ratings provide some validation, but that’s not the goal. Great brewers work hard to impress themselves first, and then hope that we agree that something is good.

Still, if a brewery produces a beer that enjoys a high ranking, it should be proud. I do not mean to suggest that such rankings are complete nonsense, I am simply pointing out the nature of such rankings and how the unavoidable groupthink factor influences them.

Personally, and brewers probably agree with me, I am more interested in results and feedback from blind tasting events where the judges do not know what beer they are drinking or how anyone else at the table is scoring it. At some tasting panels, I have even been asked not to voice any reactions to the beers while the tasting panel is in session. Not even a “hmmm” or an “ahhh.” No raised eyebrows, no crinkled noses. The goal is to remove groupthink from the equation.

In the end, I suppose none of this really matters all that much unless you’re a brewery that gets a crappy rating and can’t shake it. One bad Yelp review has been known to send a restaurant into an irreversible nose dive.

Here’s an idea. How about a beer app that doesn’t let you see other ratings until you’ve rated the beer yourself? When you bring up a beer on the app, you must choose whether you want to rate the beer yourself or see how other people have rated it. Once you’ve seen the beer’s score, you cannot rate that beer.

That way, we won’t be tempted to open the app to find out if we should, or should not, enjoy the beer we are drinking. I worry that too many people use beer apps and online forums for that reason.

It’s easy to adopt an opinion, but it is much more difficult to formulate one of your own.

The ideas and opinions expressed in this editorial are purely my own and do not reflect the ideas or opinions of anyone else. That is unless you agree with me. No beers were harmed in the making of this editorial.