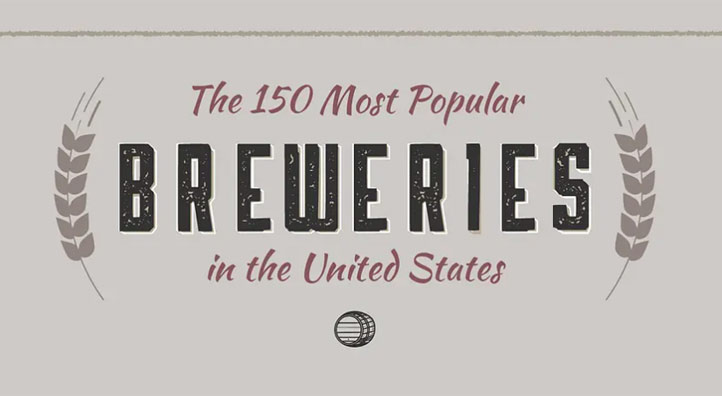 Exactly how would you measure the popularity of a brewery? How would you rank all of the breweries in America based on popularity? No doubt, a lot of you do not care about popularity. You are much more interested in knowing which are the best breweries.

The title best brewery is subjective and mercurial. That is, it is not based on data but construed by opinions. Even if those opinions belong to the world’s best beer judges, they are still opinions. Popularity is a different thing altogether. It can be measured. You may disagree with the method, but popularity is something that can be backed up by data, as it is in this case.

In compiling the lists, they took into account measurable data: Number of Facebook followers, number of Instagram followers, Yelp score, and number of Yelp reviews. Now, you may think that’s a bunch of nonsense, but I would ask you to devise another method for determining a brewery’s popularity. Not quality, but popularity.

Anyway, given the methodology and the data, I think the results are interesting. That’s why I share them here. To see the complete results, and learn more about the method, check out the story at https://housemethod.com/blog/most-popular-breweries/.

Most Popular Breweries in the USA

The first Oregon brewery to appear on the list is Binary Brewing, which is interesting and a bit surprising. The first “Washington brewery” to appear on the list, Elysian Brewing (owned by Anheuser-Busch), is much less surprising because Elysiannow produces beer at multiple locations across the country and distributes beer nationwide. It is the most visible “Washington brewery” by a longshot.

The Five Most Popular Breweries in Washington
(Not necessarily the five that made the top 150, and not even in the same order, which is interesting).

In the coming weeks, I anticipate getting my hands on 2019 production numbers and will learn which Washington breweries produced the most beer last year. While four of the five breweries listed above will most assuredly appear near the top of that list, Seapine Brewing and Backwoods Brewing probably will not, which makes their position on these lists interesting and impressive.