As 2016 draws to a close, it’s time to take a look at the state of craft beer in America. The Brewers Association (BA), the non-profit group that represents the USA’s small and independent breweries, just released its annual report. Below, I share some of that information along with my own thoughts.

Brewery Count: “There are now 5,005 breweries in the USA. Almost all (99%) are craft brewers.” The Brewers Association defines a craft brewery as a small and independent brewery. (See more about their definition.)

Although 5,005 is a lot of breweries, and many people worry about market saturation and an inevitable bubble burst, I think the USA still has room for more breweries. Here in the Pacific Northwest, where he have so many breweries and craft beer has long been a way of life, it’s easy to think that the market is getting too crowded to support more breweries, but in many places across the country craft beer is still a new and novel thing. These emerging craft beer markets need to be served. 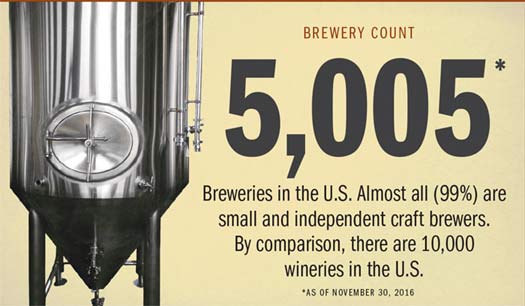 My opinion about the local beer scene is that there is not a lot of room, if any, for more large craft breweries. By large I mean breweries making more than, say, 15,000 barrels per year. My feeling is that there probably isn’t room for a new Fremont Brewing or Georgetown Brewing to suddenly pop into existence here in Seattle. Unless you’re already on the way, you’ll never get there. I think there is still plenty of room for more breweries and brewpubs in America, but any realistic hope of becoming the next Lagunitas or Sierra Nevada is probably dead. That doesn’t mean we cannot support more breweries.

The continued growth of the craft segment –in terms of dollar sales– is another reason why I think we can support more new breweries, within reason.

Continued Growth for the Segment: “By mid-year, small and independent breweries grew by eight percent, reflecting dynamism and a bright spot for the domestic beer market.”

They’re talking about dollar sales figures. While overall beer sales have declined in recent years, the craft beer segment has continued to grow. Less people are drinking beer, but more people are drinking the good stuff. Wine, liquor and malted non-beer beverages are taking a bite out of overall beer sales, but craft beer sales continue to rise. Beer’s diminishing roll in overall alcohol sales is impacting the big beer companies almost exclusively. Then again, I did see a report recently which showed that the largest craft breweries (Boston Beer Co., Sierra Nevada, etc) were taking a bit of a hit too. Another sign that people are leaning towards smaller producers, perhaps. 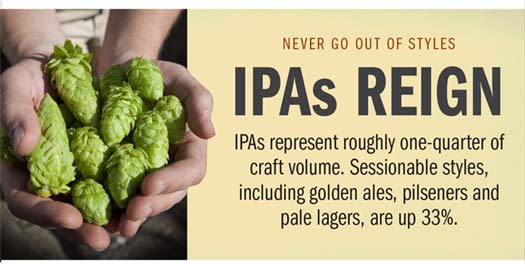 We need to get out of our Northwest beer bubble and look at the bigger picture. Around here it has become fashionable to hate IPA and some people imagine themselves to be a more highly evolved species of beer drinker, but even here in the Northwest it remains the best-selling beer style by a long shot. While the snobbiest beer drinkers snub their noses at IPA, the growing number of craft beer drinkers continue to crave them. We can debate the reasons why, we can argue about the merits of the style, but we cannot deny that IPA rules the roost.

I’m happy to hear the news about the “more sessionable styles” gaining ground. It’s encouraging to know that more people are beginning to recognize the merits of a well-built, finely crafted Pilsner, for instance.

Freedom of Choice: “As the world’s two largest brewers merged into a multinational conglomerate two and a half times the size of the U.S. beer market, the BA was at the center of the discussion, advocating for fair competition for the nation’s small and independent craft brewers and access to market ensuring beer enthusiasts get to continue to choose from a vast variety of options. Approximately 65 percent of craft beer lovers said they are drinking more craft specifically because it offers more variety.”

If choice and variety are important to the contemporary beer drinker, then it logically follows that more breweries means more choices and more variety. Thus, the USA has room for more breweries.

I suspect that everyone reading this blog knows that the two largest beer manufactures on earth merged into one monolithic company. Read about it here. If you know anyone who is unaware of the fact that Anheuser-Busch and SABMiller are now one entity, one huge mega beer corp that is bent on monopolizing the global beer market, please explain it to them.

Not surprising, really. Like most of you, beer tourism is part of my life. Apparently I am not alone.

Also, it’s no surprise that Portland, OR ended up at the top of the list, but how about Santa Rosa-Petaluma? Lagunitas Brewing (in Petaluma) is great, but let’s face it, the fact that Santa Rosa-Petaluma is on this list is entirely because of Russian River Brewing (Santa Rosa) and Pliny the Younger. This year a survey revealed that the annual Pliny the Younger release event in February brought 14,000 visitors to Sonoma County and contributed $5 million to the local economy. Read about the power of Pliny. 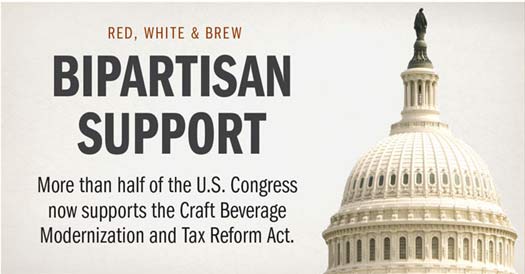 Bipartisan Beer Support: “With a craft brewery in nearly every congressional district in the country, more than half of the U.S. Congress now supports the Craft Beverage Modernization and Tax Reform Act. The BA has been a key player in moving forward this bipartisan legislation that seeks to recalibrate the current federal excise tax structure for the nation’s brewers and reform burdensome laws regulating America’s brewing industry.”

This recalibrating of the tax code has been in the works for years and support has been growing steadily with little vocal opposition. Supporters profess that this tax reduction will help breweries grow, which in turn will create jobs and lead to an overall increase in tax revenues. Smart people at places like Harvard agree.

It gets support, it gets moving, then it stalls and goes away. The next congressional session comes along and the cycle repeats itself. Thing is, although there really hasn’t been much opposition to this plan, nothing has happened. I guess it’s true when people say that progress is the opposite of congress.

Beer tax reform is not an issue that allows pundits to stand up and scream, “You’re so stupid!” That said, bipartisan support or not, I fear that beer tax reform will get lost in the thunder, bluster and fury of other, more divisive issues. If I sound discouraged, it’s because I began reporting on this “recalibration of the beer tax” back in 2011.

Want to read more about the year in review? See the complete 2016 Craft Beer Year In Review from the Brewers Association here.