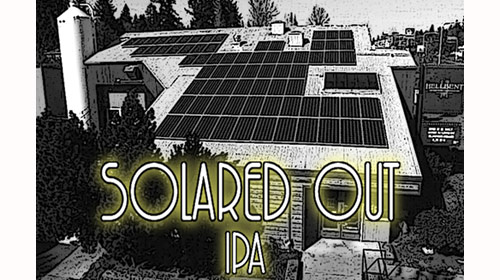 This weekend, Hellbent Brewing releases Solared Out IPA. The fact that they’re releasing the beer in time for Earth Day (April 22nd) is no accident.

If you’ve visited Hellbent Brewing you’re probably familiar with Steven, the big and affable yellow labrador retriever that calls the brewery home. Also, you’re probably familiar with the couches, the game room, the patio, and so on, but what you may not have noticed at Hellbent Brewing is the solar array on the rooftop. According to the Seattle Office of Economic Development, Hellbent has the largest solar energy system of any brewery in the state, generating about 30 percent of its own energy.

“At Hellbent Brewing Company we value the environment and feel lucky to be based in the Pacific Northwest,” says Randy Embermate of Hellbent Brewing. “Utilizing as much clean energy as we can is one way we choose to give back to this region we call home. Releasing the weekend before Earth Day, we dedicate this beer to our solar panels.”

Solared Out IPA is described as a west coast style IPA that focuses on the citrus and tropical fruity aromas from the hops. It clocks in at 6.8 percent ABV and 48 IBU. Brewed with a simple recipe of pale malt, rolled oats and malted white wheat giving it the hazy character and mellow malt background then adding, El Dorado, Azacca, Mosaic and Simcoe hops in the whirlpool and then finishing with a dry hopping of Citra, Azacca, Simcoe, Mosaic, and Amarillo.