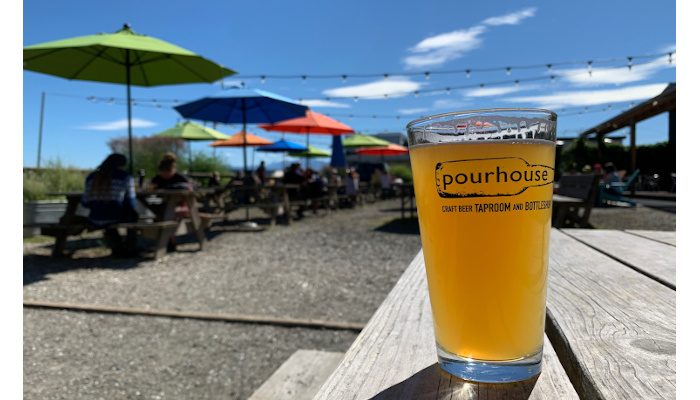 This summer, perhaps even more than any summer ever before, the idea of drinking a tasty beer al fresco sounds really good. It seems that in a COVID-impacted world, for most people the great outdoors feels like the safest place to be. We may look back on 2020 as being the summer of the beer garden.

When the weather is favorable, and sometimes when it’s not, my wife Kim and I have always preferred drinking beer outside. Below, I list some of our favorite beer gardens that we know are currently open during the summer of 2020. The list is far from comprehensive and is based on nothing but our experience and our opinion. You are welcome to comment and share what you know.

Our criteria? We’re talking about outdoor drinking opportunities at breweries and beer-focused bars that are open right now (as of July 30th). And, of course, we’re talking about destinations within the confines of Washington state. We STRONGLY suggest that you keep an eye on things and do not assume that these places are open. In this topsy-turvy world, this is a moving target.

As the Spokane River meanders its way into downtown Spokane and begins its approach to Spokane Falls, it lazily passes the beer garden at No-Li Brewhouse. This place is transportive. The river and the beer offer a level of relaxation that feels like you’re miles from the city, but you aren’t. Sink into an Adirondack chair or grab a picnic table and let the river wash away your worries.

I’m awash with a sense of relaxation just thinking about the large and lush lawn, the expansive views, the pond, and the resident black lab, Tiny Dog, who tirelessly greets his guests and herds his tennis balls.

From the lawn at Cowiche Creek Brewing, gaze south across the valley at Snow Mountain Ranch, part of the Cowiche Canyon Conservancy, knowing that it is one of our favorite hikes each spring (trail info and reports here). To the west, the Cascade Mountains loom on the horizon, snow-capped, formidable, and glorious. They were open, and then closed, but recently received  approval as restaurant, which is why they’re open again even though Yakima County continues to face challenges. Yup, they’re now serving food along with beer.

Like Port Townsend isn’t awesome enough on its own, Pourhouse Taproom and Bottleshop has a huge beer garden right on the water. There’s even a view of Mount Rainier in the distance. Boat traffic from the nearby marina, along with the birds and the seals, provide hours of relaxing entertainment. And of course, there’s an always-excellent, carefully curated, rotating tap list.

From the front of the building, you’d never guess it but the beloved brewery offers a huge patio out back that sits right along the Chewuch River, very near the point where it converges with the Methow River. It doesn’t get much better than spending a warm summer evening enjoying beers and perhaps some live music on the patio at Old Schoolhouse Brewery on the banks of the Chewuch.

How much do we love this beer garden at Boundary Bay Brewery? Kim and I almost chose to get married there. Seriously. It almost defies description. They’ve done a really, really beautiful job of creating an oasis in downtown Bellingham. Sunken below street-level, fabulous landscaping, and plenty of room, they’ve created a serene atmosphere that is only disturbed by jovial crowds, laughing children, and live music. Well, at least that’s what it was like in a pre-COVID world. I’m sure the smaller crowds are still jovial. These days, the beer garden offers different “zones” including both Adirondack fire pit circle seating and picnic tables.

Welcome to Kris and Bill Voigt’s house, aka Birdsview Brewing. This place reminds you that, like beer, life does not need to be complicated in order to be good. A few years ago, Bill’s daughter, Julie, took over the reins as the brewer. Momma Kris is probably still the one making your lunch for you. Usually, most of the Voigt family is around. Lots of grass, picnic tables, and a slow-paced, relaxed atmosphere complete the pastoral scene. BTW, the tiny town of Birdsview is located on the Skagit River near the slightly less tiny town of Concrete.

This place is really, really popular. I mean, like really popular. And it deserves it. Along a busy street in a very busy neighborhood, they’ve managed to make it feel removed from the bustle.

Any day of the week, at any time, you’ll see day-drinkin’ mommies and daddies with toddlers in tow, Untappd-driven beer tourists, local tech workers, and trail-tired bicyclists. The convivial crowds seated around large communal tables are now whittled down to observe the COVID restrictions, but the aptly named Urban Beer Garden at Fremont Brewing remains one of Seattle’s must-see beer destinations for sure. Oh, and the beer is spectacular.

When it first opened back in 2013, this brewery’s taproom offered a tiny indoor space with a big gravel lot outside where patrons enjoyed their beers and played cornhole. Since moving across the beer garden to a larger building, which offers more indoor seating, the sprawling outdoor area at Populuxe Brewing remains. See our note below about Ballard.

In addition to great beers and a rather huge beer garden, Farmstrong Brewing now has its own food truck on site. The picnic tables are spaced generously throughout the beer garden. Those visiting from the Seattle area, where we don’t see nearly enough Farmstrong beers, will be impressed by what they’re doing up yonder in Mount Vernon.

The Beveranda is always lovely, though finding a seat out there could be tough on sunny summer days, but Beveridge Place Pub has expanded into its parking lot for the COVID summer. Like the Beverana, it is surrounded by lovely plants and lots of happy pollinators. Once seated, order your beer from your phone and they’ll deliver it to you. Nice! Makes you wonder, who needs a parking lot anyway? 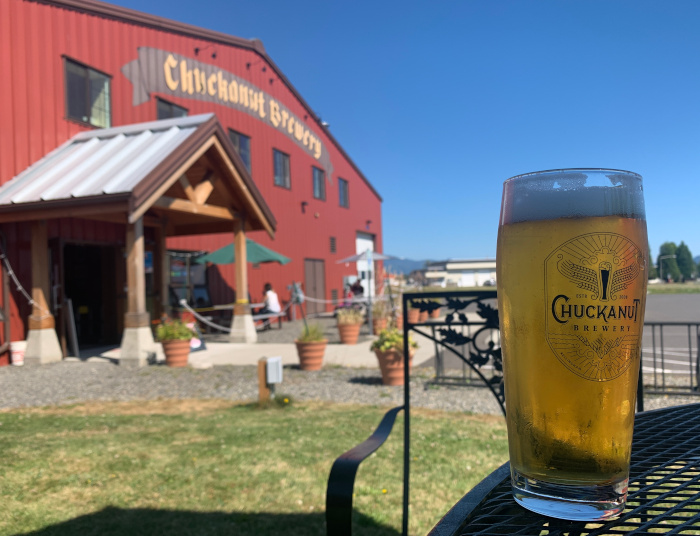 The beer garden at Chuckanut Brewing’s Burlington location has been expanded to include a fair portion of the grassy area surrounding the brewery. It is very relaxing to sip on one of their fantastic beers and listen to nothing but the occasional sound of small airplanes coming and going from the airfield across the street. This summer, do not miss the Single Hop Pilsner — the Trident.

We had to pick one, so we picked Populuxe Brewing, but they are not alone. Stoup Brewing was a very close runner up, and Urban Family Brewing is right across the street. Not far away, Peddler Brewing also offers a large and lovely beer garden. Ah, Ballard.