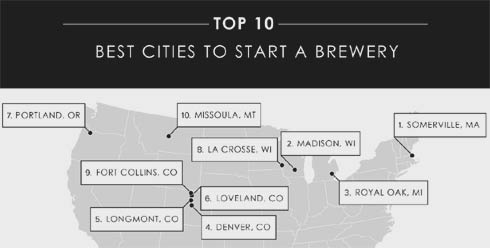 Because this is a “top 25” thing, I’ve highlighted important points so skimmers can just jump to the list and not consider its origins.

A lot of beer drinkers daydream about opening a brewery. Some even ponder the question of where to do it, even if it’s only an imaginary brewery. Darn-near everyone has an opinion about where is, and where is not, a good place to open a new brewery. Well someone actually did an analysis to determine the top 25 places in America to open a brewery. Seattle ranked 25th on the list and is the only community in Washington to make the cut.

According to the study, Colorado seems to be the place you should open a brewery. Several cities in that state made the list. At the top of the list, Somerville, Massachusetts, followed by Madison, Wisconsin and Royal Oak, Michigan. Surprisingly, Denver ranked fourth even though that city is already happily crowded with breweries.

The analysis was conducted by BOE (bidonequipment.com), a company focused on helping people sell all types of mechanical equipment, including brewery equipment. Exactly why they decided to do a study like this, I do not know, but they seem to have done a pretty earnest job of it, taking into account a number of relevant factors.

Only cities with a population larger than 50,000 were considered. Primarily, the study looked at two key categories, “Business Environment” and “Business Costs,” taking into account things like the percentage of the population that is 21 or older, the number of breweries per capita, self-distribution laws, the median income of the drinking public, state excise tax rates, and the cost of brewery licenses.  Other factors were also considered. You can learn more about the study and the methodology here.

One thing that hurts our Washington communities in this analysis is the cost of a brewery license and the tax rate paid by breweries. Problem is, over 99 percent of the breweries in Washington do not pay the licensing fee or the tax rate quoted in the study.

According to the analysis, it costs $2,000 per year to license a brewery in Washington. That is exponentially higher than most other places on the list. In Colorado, for example, the annual fee is $300. In Massachusetts, it’s just $44 per year. BUT there’s a problem with that number. It’s not real. In Washington, only breweries that produce more than 60,000 barrels per year pay that rate, and that’s a very, very small number of breweries. The vast, vast, vast majority of Washington’s 400-plus breweries produce 1/10th that much beer and pay only $100 for their license.

In 2018, only one Washington brewery produced over 60,000 barrels, Georgetown Brewing.

Also, the study quoted a tax rate of $8.08 cents per barrel. Again, that rate only applies to breweries that produce more than 60,000 barrels per year. Otherwise, a brewery in Washington pays just $4.78 per barrel.

I would be interesting to see how places like Bellingham, Vancouver, Tacoma, and Spokane would rank if those numbers were corrected.

As far as I can tell, the study did not account for things like real estate availability and cost, which would hurt Seattle’s ranking. Also, the cost of living in Seattle is astronomical compared to many of the other cities on the list. Also, regulations on the municipal, county and state level were not considered in the analysis. As anyone who’s opened a brewery in Seattle can attest, municipal codes and inspections might be the greatest challenge of all.

Each city was given a score based on the kinds of factors mentioned above. Here is how they stacked up. This list was not written by some lightening-handed god and handed down from a mountain top. It is not indisputable. No top 25 list is absolute, regardless of the topic or the methodology. Such lists are food for thought, conversation starters, and argument inducers. That’s the point. Top 25 lists like this are just for fun and, at best, they are thought-provoking.