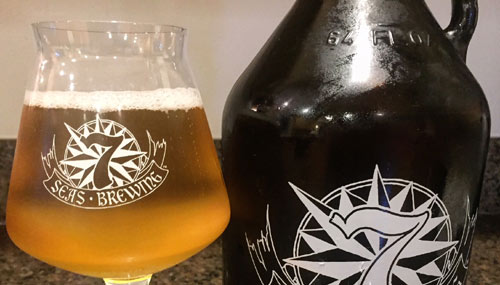 Ah, the haze craze. It shows no signs of slowing down, much to the delight of the many beer lovers who covet hazy IPAs and their soft, murky, fruity embrace. But there’s a new IPA in town and it’s a brute. Actually, it’s Brut IPA and this newfangled version of IPA just might steal the hearts of beer lovers everywhere, especially here on the West Coast where this new rendition of an old favorite was born.

Basically, brut is a term most often associated with champagne and means extremely dry. Dry, as in lacking sweetness. As the name implies, Brut IPA is a bone-dry version of IPA. These brews are noted for their effervescent character and are often sparkling clear. They contain no juicy sweetness, just hoppy goodness. No cloudy haze. No thick, pillowy mouthfeel. In some regards, they’re like an anti-hazy IPA. 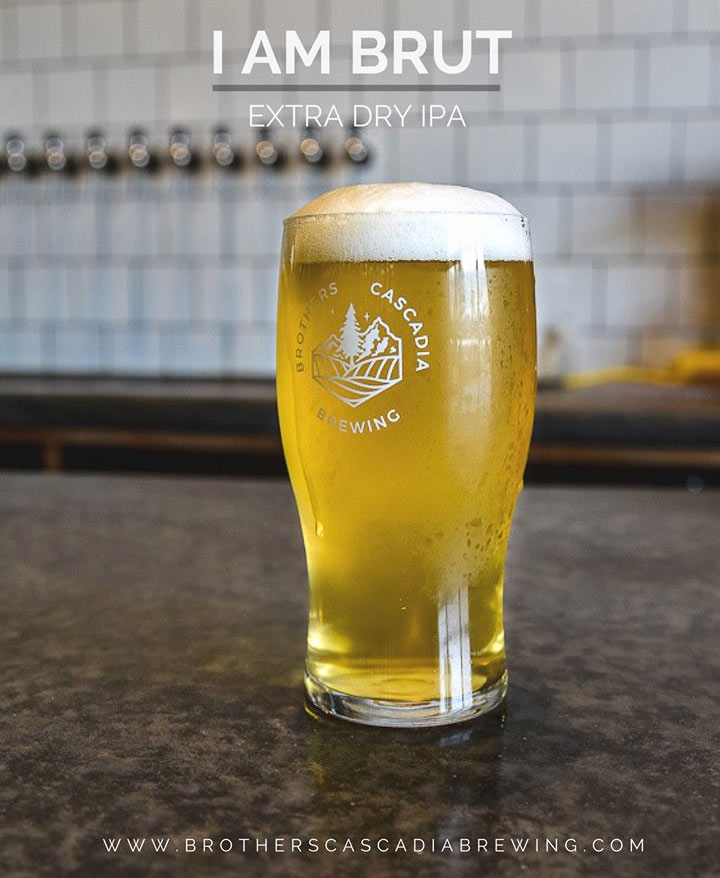 Among the Washington breweries that have produced, or are producing, Brut IPAs are 7 Seas Brewing, Triceratops Brewing, Structures Brewing, Brothers Cascadia Brewing, Everybody’s Brewing, and White Bluffs Brewing. Matchless Brewing has one on the way, as does Wingman Brewers (a collaboration beer with Brothers Cascadia Brewing). A collaboration beer brewed by Hellbent Brewing and Lazy Boy Brewing, Hella Lazy Brut IPA, gets released on July 18. Not doubt, other breweries will soon offer their own interpretation of this new style.

First up, here’s what Brut IPA is not. It is not a beer fermented using champagne yeast. (That’s a different topic.) Only the term brut is borrowed. Brut IPA is not necessarily more bubbly than any other beer, though that’s at the brewer’s discretion and some may choose to ramp up the carbonation to lend a more bubbly character.

I should point out that Brut IPA is a very new style of beer and there is nothing chiseled in stone about to how it is made or exactly how it should taste. That said, some standards have already emerged.

Brut IPA is brewed like any other IPA but with enzymes added during the brewing process to reduce the presence of any residual sugars that impart sweetness on the beer. In other words, the only sugars in the wort—the unfermented beer—are fermentable sugars, so when fermentation is complete, no sugars remain. At least, very few sugars remain. Less residual sugar makes for a dryer beer.

What appears to be another attribute of Brut IPA, brewers are using lighter malts in their grain bills. For instance, 7 Seas Brewing used light pilsner malt in their Axis Brut IPA. I’ve heard rumblings of brewers using really light grains, like flaked rice and corn. Basically, introduce amylase to what would otherwise be a pretty dry beer anyway.

As far as hops are concerned, when brewing a Brut IPA the general rule is that they are only added late in the process to provide aroma and flavor. Dry-hopping (adding hops to the beer after the brewing process is complete and the beer is conditioning) also seems common.

There appears to be no standard for alcohol content. When released, Hella Lazy Brut IPA, a collaboration beer from Hellbent Brewing and Lazy Boy Brewing, will clock in at 4.3 percent ABV. Axis Brut IPA from 7 Seas Brewing weighs in at 6.9 percent ABV. I Am Brut Extra Dry IPA from Brothers Cascadia Brewing sits between the two at 5.5% ABV.

Of course it doesn’t take long for brewers to start experimenting with a new style. Although most beer drinkers have yet to try a straight-up Brut IPA, some breweries just can’t help themselves and are already flexing their creative muscles. White Bluffs Brewing created a Belgian-style Brute IPA. The collaboration beer that Wingman and Brothers Cascadia created is a pink-tinged, raspberry Brut IPA, described as “very dry, bright, pink and a little fruity.”

Where Did it Come From?

Kim Sturdavant, the brewmaster at Social Kitchen and Brewery in San Francisco is most-often credited with creating the first Brut IPA.

“I had it in my head: What would happen if I used this (enzyme) with a smaller beer, like an IPA, to make a basically sparkling hop beverage with no sweetness in it?” said Sturdavant in an interview with SFGate.com. “And I was thinking about it for a year or so before I actually squeezed it in the schedule and was able to brew one.”

Since he introduced the style, other breweries have followed suit. It seems to be catching on out here on the West Coast in particular.

According to Mike Runion of 7 Seas Brewing, the response to Axis Brut IPA has been very positive. Add my name to the list of people who like this beer.

Axis Brut IPA clocks in at 6.9 percent ABV, but that will sneak up on you in a hurry. It tastes positively and dangerously sessionable. The appearance is sparkling, clear and golden. The taste is effervescent, with very pure, clean hop flavor. It is bone dry. No sweetness at all. Because it’s so highly attenuated, the mouthfeel is almost watery, but not in a bad way, and the carbonation helps bring the flavors to life.

Axis Brut IPA goes down, dare I say, like a light beer: it doesn’t fill you up and bloat your belly. Also, although it entertains your palate plentifully, there’s no palate fatigue. I drank two pints of it and the last sip tasted just as fresh on my palate as the first.

When you look at Axis Brut IPA, and when you drink it, this beer could not be more unlike a hazy Northeastern IPA. Those brews most often include high-protein grains like wheat and oats to help suspend particulate matter and enhance hop character. Along with creating a hazy appearance, those grains also give the beer a pillowy, richer mouthfeel. I’ve heard some people say that drinking hazy IPAs give them a sensation of being overly full and bloated, presumably because of those higher-protein grains. Like I said, to some degree Brut IPA seems to be the perfect antithesis to hazy IPA.

Will this new style of dry, sparkling-clear IPA catch on? Will it become as popular as hazy, Northeastern IPA? Only time will tell. Maybe the amylase craze will replace the haze craze. Maybe they’ll just politely coexist. We will see.