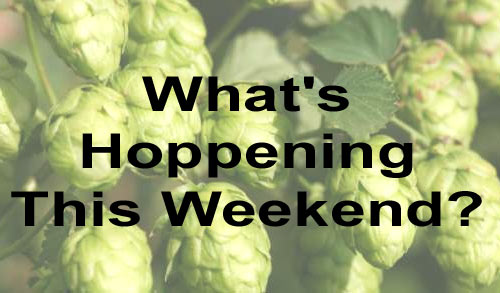 This is another busy weekend for beer lovers around the Seattle area that includes one of the year’s most popular beer festivals: Winter Beer Fest. As we stumble headlong for the holidays, get out there and do some celebrating. There’s no shortage of things to do. As always, use the comments section below to share info about things I’ve missed. Don’t forget to peruse our events calendar.

Hovemberfest Conclusion at Beveridge Place – Now until Dec. 5th – The competition has been going on all month. The people have cast their ballots and now a final three have been determined: Counterbalance Brewing’s Multipass IPA, Georgetown Brewing’s Journey On IPA, and Reuben’s Brews’ Crikey IPA. It’s a blind tasting of the three, then you cast your ballot. Winner will be the house IPA (always-on-tap IPA) at the pub for 2019. Winner announced next Thursday at Cask-O-Rama.

Old Wooly Annual Release – Sat. and Sun. (Dec. 1st & 2nd) – For us old timers, the annual release of Old Wooly Barleywine at Big Time Brewing in Seattle is a seasonal tradition. Seattle’s oldest brewpub began releasing this stuff back when nobody even knew about a thing called barleywine. Add this one to your beer cellar and let the bottle get dusty, or just drink it now.

One Year Anniversary for Masonry – Sat. Dec. 1st – The Masonry in Fremont celebrates its first anniversary with some truly outstanding beer from the likes of Jolly Pumpkin, Cantillon, Jester King, Hill Farmstead, and other rare treats not often found in these parts.

Keg Christmas Tree Lighting – Sat., Dec. 1st – The folks at Pyramid Alehouse and Brewery in Seattle are constructing a giant Christmas tree out of kegs. They hit the lights on Saturday evening.

Holiday Sour Beer Day w/ Santa – Sat. Dec. 1st – Lucky Envelope Brewing is having a sour beer event. Pucker up because Santa will be there for pictures too.

Santa and Lighted Implement Parade at Varietal – Sat. Dec 1st – A shout out to our friends east of the mountains. Santa is coming to Varietal Beer Co. in Sunnyside, and you won’t want to miss the parade of lighted farm implements.

Holiday Beer Fest at Ounces – Sat. Dec. 1st – Ounces in West Seattle is dedicating 10 of its taps to seasonal beer and cider. Wear your holiday garb and get a buck off your drink. Holiday music, etc, too.

A Very Furry Christmas – Sun. Dec. 2nd – Bring you furry little beast to The Woods Tasting Room, drink some beers from Two Beers Brewing (or cider from Seattle Cider) at The Woods and get a picture with Santa. (21+)

Spruce Springsteen Release and More – Sun. Dec. 2nd – The Pine Box in Seattle collaborated with Backwoods brewing to create a seasonal beer, brewed with (among other things) spruce tips. Along with that, a bunch of other great beers from Backwoods.

Zoigl Release – Monday, Dec. 3rd – Not exactly the weekend, but a very cool thing. I don’t have time to explain Zoigl right now except to say that it’s like a collaboration beer on steriods. You should research it yourself. They release a Zoigl beer at Stoup Brewing on Monday.

What else is happening this weekend?